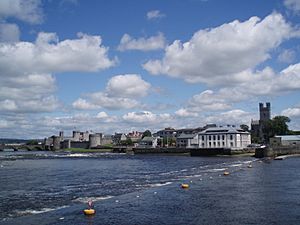 View of Englishtown on King's Island from the River Shannon. 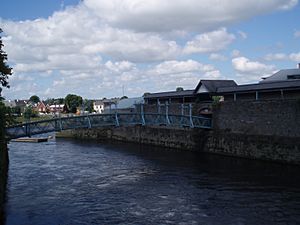 The island is formed from a distributary of the River Shannon. The Abbey River diverts from the Shannon before meeting it again at a confluence near the Potato Market.

The island probably took its name after the 13th-century English King John's Castle was built. However, a 150AD map by Ptolemy shows a place called 'Regia' at the same site as King's Island, and history suggests the presence of earlier settlements in the area. The island's location offers an ideal defensive position at a natural river crossing. 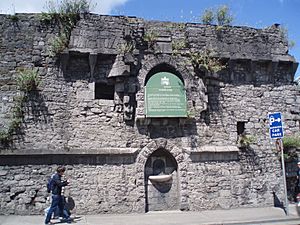 In times past, the ancient city of Limerick itself was entirely contained in the area now known as Englishtown as a walled city. The Vikings established the city in this area following the Viking Invasion of Ireland. After the Norman Invasion of Ireland, the city was taken by Norman or Old English settlers. It is from this time that the area became referred to as Englishtown and also to distinguish it from Irishtown south of the Abbey River which was populated by native Irish. It was during the Norman Conquest that many of the city's landmarks were built in this district such as the 13th century King John's Castle and the 800-year-old St Mary's Cathedral. Nicholas Street and Mary Street on the island formed the medieval city centre of Limerick and are perhaps the oldest streets in the city. Samuel Lewis writing in 1837 in his Topographical Dictionary of Ireland describes Limerick's old city of Englishtown as resembling the city of Rouen, Normandy with the housing built in Flemish fashion. Even by then though there is evidence the district was in decline as he describes the area as exhibiting a 'dirty & neglected appearance'. Following the development of Newtown Pery the city centre shifted south to the present day centre of the city and the Englishtown area lost its position as the fashionable area of the city. By the late 18th Century the old continental style cramped lofty Dutch & Flemish houses that once characterised the area were transformed into tenements and rented to Limerick's poorest. Englishtown became characterised by poverty, slum living and squalor. All of the slums were cleared in the early to mid 20th Century, resulting in the loss of most of the areas historical built heritage such as the collection of Flemish townhouses, Ireton's Castle, the Exchange building, the Tholsel amongst much more. Unfortunately many buildings and shops in the area remain derelict or in deteriorating conditions today.

St Mary's Park is a local authority housing estate located on the northern part of the island known as the Island Field. As one of the most deprived areas in Limerick city, it is earmarked as part of the overall Limerick city regeneration project which will see the estate replanned and rebuilt with greater integration to the city. 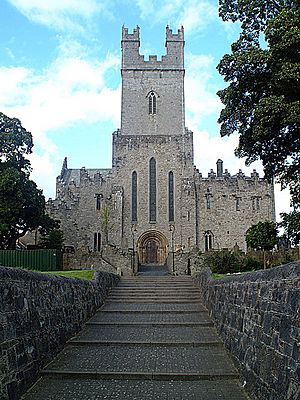 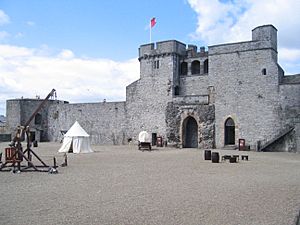 As the most historic and ancient part of Limerick, King's Island and the Englishtown area contains many notable buildings and landmarks such as:

All content from Kiddle encyclopedia articles (including the article images and facts) can be freely used under Attribution-ShareAlike license, unless stated otherwise. Cite this article:
King's Island, Limerick Facts for Kids. Kiddle Encyclopedia.