Kiplin Hall is a Jacobean historic house at Kiplin in North Yorkshire, England, and a Grade I listed building. It stands by the River Swale in the Vale of Mowbray. Kiplin Hall is rich in education, in architecture and art, a museum of history, a gallery and provides a biographical record of its past English country house owners. The nearest villages are Scorton, Great Langton and Bolton-on-Swale.

Like many great estates, the history of Kiplin was shaped by the C16th religious conflicts around the Reformation. The land was originally a monastic holding, under the ownership of Easby Abbey. Following the dissolution of the monasteries, the land at Kiplin passed to John Scrope, 8th Baron Scrope of Bolton and then to Thomas Wharton, 2nd Baron Wharton. Wharton, as a loyal servant of the Catholic Queen Mary, fell out of favour after her death, and sold the estate to the Calvert family in 1559.

The house was built sometime during 1622–1625 for George Calvert, Secretary of State to James I, who later became first Lord Baltimore and founder of Maryland in what is now part of the United States.

Initially built as a hunting lodge it was a slightly rectangular building fashioned of red brick with diamond patterning known as diapering formed from blue-black headers incorporated into the brick bond. Kiplin had four towers, which unusually, were not placed at the corners of the structure, but at the centre of each of the four walls – the north and south towers containing staircases, whilst the east and west comprised part of the rooms in which they were contained. At the summit of each tower is an ogee dome.

In 1722, Charles Calvert found himself in financial difficulties and sold the Kiplin estate to his mother's second husband (his stepfather) Christopher Crowe for £7,000 (equivalent to £950,000 in 2018).2018 Although not a member of the nobility, Crowe had been British Consul in Livorno, Italy and enjoyed the lucrative contract for supplying the British naval fleet with wine and olive oil. Combined with his activities in collecting antiquities for the British aristocracy his wealth and power grew. Purchasing Kiplin Hall around a century after its construction, he found the house to lack comfort (the Calverts had never lived there) and set about a renovation programme including the addition of a grand staircase, fireplaces and dado rails as well as a servants' wing to the north (much of which was demolished in the 1970s). Crowe enlarged the Kiplin estate to some 4,000 acres. 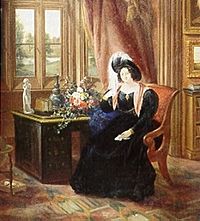 In 1817 Christopher Crowe's great-granddaughter Sarah Crowe married John Delaval Carpenter, fourth (and final) Earl of Tyrconnell of the fourth creation. The first Earl's daughter had been mistress to a Prince and Almeria Carpenter's portrait by Angelica Kauffmann is displayed in the dining room.

Lady Tyrconnell inherited Kiplin the following year and in 1819 commissioned the architect P. F. Robinson to build a wing to the south. Built in 'Wyatville's Gothic' this room was initially a Gothic-style drawing room. After 30 years of marriage the couple had one daughter, Elizabeth, who died the same day she was born. They were now faced with the problem of to whom they might pass the Hall and estate on their own deaths. Predeceased by her husband, in 1868 Sarah died leaving the estate to John Carpenter's first cousin twice removed, Captain Walter Cecil Talbot.

Talbot was the second son of Henry John Chetwynd-Talbot, 18th Earl of Shrewsbury and inherited Kiplin Hall on condition that he legally changed his surname to Carpenter, married a Protestant and submitted to a seven yearly examination of his faith by a team of Anglican clergy. He accepted these conditions and inherited the estate in 1868, eventually taking up residence in 1887. He instructed the architect William Eden Nesfield to add a further floor to the Gothic-style drawing room and the space was converted to a Jacobean-style library. His second wife, Beatrice de Grey was prominent, in the Arts and Crafts movement and the Hall contains some beautiful works by local craftsmen in this style. Eventually promoted to Admiral, he died on a trip to London in 1904 and his only daughter Sarah Marie Talbot Carpenter inherited.

Sarah Talbot Carpenter married Christopher Hatton Turnor from Stoke Rochford in Lincolnshire in 1907 but they had no children. The couple never resided at Kiplin and the house was let to tenants. Five sales of land reduced the estate to 120 acres of land and disposed of many of the tenant farms, land and cottages which had contributed to its running. The estate entered virtually a century of decline. Much of the nearby local landscape has since been extensively quarried for sand and gravel extraction.

In 1937, Sarah Turnor shared ownership of the Hall with her first cousin, Bridget Elizabeth Talbot, daughter of the Admiral's youngest brother Alfred. Miss Talbot had happy memories of visiting the estate in her childhood and had previously campaigned to save the Ashridge Estate near her home in Little Gaddesden (near Berkhamstead). In an attempt to capitalise on the connection with Maryland (see above) she advertised the Hall as a guest house to American visitors and as a conference centre. From 1937 until 1958, she tried to interest the National Trust in taking over Kiplin, but they remained largely indifferent, considering the Hall of little historical significance and insisting that the north and south wings, which were later additions, would have to be demolished.

During the Second World War the Hall was requisitioned by the Royal Air Force and used as a maintenance unit, storing and supplying armaments for local airfields at RAF Catterick, RAF Croft and RAF Middleton St George. In addition some of the rooms were converted to flats for officer's use and it was used by men from the 1st Battalion of the East Lancashire Regiment as a place to recover after being rescued at Dunkirk.

In February 1968, Miss Talbot set up the Kiplin Hall Trust, its purpose being to hold Kiplin Hall and its appurtenances upon Trust permanently to preserve the same for the benefit of the nation as a place of beauty and historical and architectural interest. Bridget Talbot died in November 1971, leaving the contents of the Hall to the Trust, which still cares for the Hall and estate today.

Bridget Talbot was a rather "remarkable woman who received the Italian Medal for Valour for her work with the Red Cross on the Italian-Austrian front during the First World War and who invented a waterproof torch for lifebelts which saved the lives of many seamen during the Second World War. She stood as a Liberal Party candidate for Bermondsey in 1950 and in 1968 established the Kiplin Charitable Trust to preserve the Hall." Bridget Talbot was awarded for her service the Italian Medal of Military Valor (Medaglia d'oro al Valore Militare) for exceptional valour as a nurse, Croce di Guerra (Croce al Merito di Guerra) and the British Order of the British Empire as an Officer of the Most Excellent Order of the British Empire (O.B.E.).

Following extensive renovation and refurbishment, the property is now open to the public and represents an insight into almost four centuries of life in North Yorkshire.

A permanent exhibition charts the founding of Maryland by George Calvert and the lives of the families who have lived in Kiplin Hall through the centuries.

Historic records of Kiplin Hall and its families from the early 18th century to the 21st century are held at the North Yorkshire County Record Office in Northallerton and at Kiplin Hall.

Washington College in Maryland offers a three-week summer program in English Literature. Lectures are presented each morning and students participate in afternoon field excursions. Significant historic, literary, landscape, and architectural sites of interest are part of field excursions. Influential literary figures such as Wordsworth, Coleridge, Shelley and others found the area around Kiplin Hall inspiring to their works.

The University of South Carolina has a summer program (Hist 786) in England to "provide comparisons with U.S. theory and practice in archives administration, museum management, and historic preservation. It offers behind-the-scenes tours of museums and historic sites, as well as meetings with curators, archivists, administrators, and government officials to discuss the practice of public history in the UK." This includes Kiplin Hall.

Kiplin Hall received two Hudson's Heritage Awards in two categories "at a prestigious awards ceremony in London" on 3 December 2012. One was being chosen as England's "Hidden Gem" award and the other was for the "Best New Discovery."

All content from Kiddle encyclopedia articles (including the article images and facts) can be freely used under Attribution-ShareAlike license, unless stated otherwise. Cite this article:
Kiplin Hall Facts for Kids. Kiddle Encyclopedia.