Kircubbin, County Down facts for kids 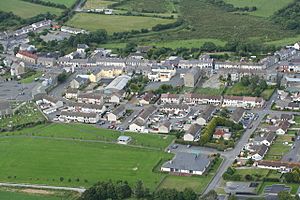 Kircubbin is a village and townland in County Down, Northern Ireland. It is on the shores of Strangford Lough, between Newtownards and Portaferry, in the Borough of Ards. The village harbour contains leisure craft, yachts, and a sailing club. The main street was remodelled in 2008 with some old houses knocked down and rebuilt as new. the village had a population of 1,153 people in the 2011 Census.

It is known as Cill Ghobáin in Irish (possibly derived from Scots Kirk and Irish Gobáin, meaning "Church of Gobáin") and Kirkcubbin in Ulster-Scots.

Kircubbin (then known as Cubinhillis) and nearby Inishargy are mentioned in early medieval records. This possible translation of the Irish name is the only evidence that connects the Irish Saint Goban to the village. John de Courcy, a Norman knight who invaded Ulster, brought Benedictines from Stoke Courcy in Somerset and Lonlay in France, for whom he founded Black Abbey (St Andrews in Ards), near Inishargy in the 1180s.

The Rev. William Warwick, a Presbyterian minister in Kircubbin, was hanged in 1798 near his church, for the writing of seditious documents in support of the Irish Rebellion of 1798.

Two significant incidents occurred during the Troubles. No-one was killed or injured in either attack. In 1974, St Mary Star of the Sea Church, Nunsquarter, was badly damaged by a bomb which was planted at the side door of the chapel. One man, a local joiner, who was working in the church hall adjacent to the church, left the premises shortly before the bomb went off. During 1988-1989, McKenna Community Centre on the outskirts of the village was bombed several times in the course of the troubles. The last attack on the centre, rumoured to have been carried out by Red Hand Commandos resulted in it being completely destroyed. The centre since then has been rebuilt and is still in use today.

All content from Kiddle encyclopedia articles (including the article images and facts) can be freely used under Attribution-ShareAlike license, unless stated otherwise. Cite this article:
Kircubbin, County Down Facts for Kids. Kiddle Encyclopedia.