Komitas(26 September 1869 – 22 October 1935) was an Armenian priest, musicologist, composer, arranger, singer, and choirmaster, who is considered the founder of the Armenian national school of music. He is recognized as one of the pioneers of ethnomusicology. The Yerevan State Musical Conservatory is named after Komitas. There is also a world famous string quartet named after Komitas.

Orphaned at a young age, Komitas was taken to Etchmiadzin, Armenia's religious center, where he received education at the Gevorgian Seminary. Following his ordination as vardapet (priest) in 1895, he studied music at the Frederick William University in Berlin.

He collected and transcribed over 3,000 pieces of Armenian folk music, more than half of which were lost and only around 1,200 are now left. Besides Armenian folk songs, he also showed interest in other cultures and in 1904 published the first-ever collection of Kurdish folk songs. His choir presented Armenian music in many European cities, earning the praise of many. Komitas settled in Constantinople in 1910 to introduce Armenian folk music to wider audiences. He was widely embraced by Armenian communities, Arshag Chobanian called him the "savior of Armenian music". 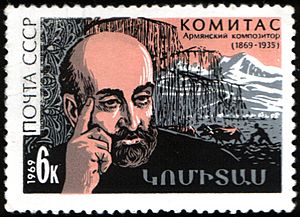 Drawing of Komitas from a USSR stamp 1969

During the Armenian Genocide—along with hundreds of other Armenian intellectuals—Komitas was arrested and deported to a prison camp in April 1915 by the Ottoman government. He was soon released under unclear circumstances and experienced a mental breakdown and developed a severe case of posttraumatic stress disorder (PTSD). The widespread hostile environment in Constantinople that reached him further worsened his fragile mental state.

In the autumn of 1916, he was taken to a hospital in Constantinople, Hôpital de la paix, and then moved to Paris in 1919, where he died in a psychiatric clinic in Villejuif in 1935. The next year his ashes were transferred to Yerevan and buried in the Pantheon that was named after him.

Komitas is widely seen as a martyr of the genocide and has been depicted as one of the main symbols of the Armenian Genocide in art.

All content from Kiddle encyclopedia articles (including the article images and facts) can be freely used under Attribution-ShareAlike license, unless stated otherwise. Cite this article:
Komitas Vardapet Facts for Kids. Kiddle Encyclopedia.