Laie (Hawaiian: Lāʻie) is a census-designated place (CDP) located in the Koolauloa District on the island of Oahu (Oʻahu) in Honolulu County, Hawaii, United States. In Hawaiian, lāʻie means "ʻie leaf" (ʻieʻie is a climbing screwpine: Freycinetia arborea). The population was 6,138 at the 2010 census.

Historically, Laie was a puʻuhonua, a sanctuary for fugitives. While a fugitive was in the pu'uhonua, it was unlawful for that fugitive's pursuers to harm him or her. During wartime, spears with white flags attached were set up at each end of the city of refuge. If warriors attempted to pursue fugitives into the puʻuhonua, they would be killed by sanctuary priests. Fugitives seeking sanctuary in a city of refuge were not forced to permanently live within the confines of its walls. Instead, they were given two choices. In some cases, after a certain length of time (ranging from a couple of weeks to several years), fugitives could enter the service of the priests and assist in the daily affairs of the puʻuhonua. A second option was that after a certain length of time the fugitives would be free to leave and re-enter the world unmolested. Traditional cities of refuge were abolished in 1819.

The history of Laie begins long before first contact. The name Laie is said to derive from two Hawaiian words: lau meaning "leaf", and ie referring to the ʻieʻie (red-spiked climbing screwpine, Freycinetia arborea), which wreaths forest trees of the uplands or mauka regions of the mountains of the Koʻolau Range behind the community of Laie. In Hawaiian mythology, this red-spiked climbing screwpine is sacred to Kane, god of the earth, god of life, and god of the forests, as well as to Laka, the patron goddess of the hula.

The name Laie becomes more environmentally significant through the Hawaiian oral history (kaʻao ) entitled Laieikawai. In this history, the term ikawai, which means "in the water", also belongs to the food-producing tree called kalalaikawa. The kalalaikawa tree was planted in a place called Paliula's garden, which is closely associated with the spiritual home, after her birth and relocation of Laieikawai. According to Hawaiian oral traditions, the planting of the kalalaikawa tree in the garden of Paliula is symbolic of the reproductive energy of male and female, which union in turns fills the land with offspring. From its close association with nature through its name, and through its oral traditions and history, the community of Laie takes upon itself a precise identification and a responsibility in perpetuating life and in preserving all life forms. Sometimes the land itself provided sanctuary for the Hawaiian people. Laie was such a place. The earliest information about Laie states that it was a small, sparsely populated village with a major distinction: "it was a city of refuge". Within this city of refuge were located at least two heiau, traditional Hawaiian temples, of which very little remains today. Moohekili heiau was destroyed, but its remains can be found in taro patches makai (seaward) of the LDS Church's Laie Hawaii Temple. Towards the mountain (mauka), the remains of Nioi heiau can be found on a small ridge. All that is left of Nioi is a coral platform.

Between 1846 and 1848, the traditional Hawaiian feudal ownership of land by the king, the ali'i nui, and his leading chiefs or konohiki was changed through the Great Mahele, or major land division. The Ali'i nui at the time was Kauikeouli King Kamehameha III, and his konohiki (leading chief) for Laie was Peni Keali’iwaiwaiole (which means "The Chief without Riches"); the wife to this konohiki descended directly from the Ali'i nui of Oahu named Kakuiewa, making his wife of higher rank than he. The result of the mahele was not in compliance with the original intent of Kamehameha III. The result was that the chiefs received about 1,500,000 acres (6,100 km2), the king kept about 1 million acres (4,000 km2), which were called crown lands, and about 1 million acres (4,000 km2) were set aside as government lands.

The land of the mahele itself was cut up into parcels, much like the traditional Hawaiian land divisions, centering on the ahupua'a, which followed a fairly uniform pattern. Each parcel was shaped roughly like a piece of pie with the tip in the mountains, the middle section in the foothills and coastal plain, and the broad base along the ocean front and the sea. The size and shape of the ahupua'a varied. However, the purpose of these remained the same. The village of Laie is located in the ahupua'a of Laie. As such, Laie followed the general pattern of life in the ahupua'a, but only the valleys in the foothills had ample water. There were ten streams that flowed through the ahupua'a of Laie before 1865 (see 1865 map). Their names were Kahooleinapea, Kaluakauila, Kahawainui, Kaihihi, Kawaipapa, Kawauwai, Wailele, Koloa, Akakii, and Kokololio. There were more streams flowing through the ahupua'a of Laie than through any of the other surrounding ahupua'a, including Kaipapau and Hauula to the southeast and Malaekahana, Keana, and Kahuku to the northwest.

A new phase of development for Laie began when the plantation of that name was purchased by George Nebeker, the president of the Hawaiian Mission of The Church of Jesus Christ of Latter-day Saints (LDS Church). The Latter-day Saints in Hawaii were then encouraged to move to this location. This purchase occurred in 1865. The sugarcane plantation was rarely profitable, and through 1879 the church had subsidized its operations with about $40,000.

Soon after the settlement a sugar factory was built. Much of the land was used to grow sugar, but other food crops were also raised. Significantly, Laie was one of the few sugarcane plantations where both kalo and sugar were grown simultaneously. This was unusual because sugar and kalo are both thirsty crops. In the plantation economy of Hawaii in the late 19th century and early 20th century, kalo usually lost out to sugar. One of the reasons both kalo and sugar grew on the plantation is because of the commitment of Hawaiian plantation workers to growing their staple. Their dedication to growing kalo included their insistence that Saturday not be a work day on the plantation so that they could make poi for their families. Both schools and church buildings were constructed in the town in the ensuing years.

Samuel E. Woolley, who served as mission president for 24 years, pushed the expansion of the operations at Laie. In 1898 he negotiated a $50,000 loan that allowed for the building of a new pump.

The Hawaiian Mission was headquartered in Laie until 1919 when the headquarters were moved to Honolulu, but by then the temple had been built in Laie, so it remained the spiritual center of the Latter-day Saint community in Hawaii.

Laie is one of the best known communities of The Church of Jesus Christ of Latter-day Saints and the site of the Laie Hawaii Temple, the fifth oldest operating Mormon temple in the world. Brigham Young University–Hawaii is located in Laie. The Polynesian Cultural Center, the state's largest living museum, draws millions of visitors annually.

Though small, Laie has had a significant impact on Hawaiian culture, despite many of its residents' tracing their lineages from various Pacific Island countries such as Tonga, Samoa, Fiji, and New Zealand. Fundraisers and feasts on the beach in the late 1940s inspired "The Hukilau Song", written, composed and originally recorded by Jack Owens, The Cruising Crooner, and made famous by Alfred Apaka.

The coastline is marked by Laie Point, a prominent lithified dune jutting out into the ocean. Two other lithified dunes (Kukuihoolua and Mokualai) lie just offshore of the point as scenic islets. Laie Beach Park was originally called Pahumoa Beach Park, after Pahumoa "John" Kamakeʻeʻāina (1879–1944), a fisherman from Lāʻie Maloʻo in the late 19th century and early 20th century who lived here and kept his nets on the beach adjacent to Kōloa Stream. He was well known in Lāʻie for his generosity and gave fish to everyone in the village, especially to those who could not fish for themselves. Pahumoa conducted many hukilau, a method of community net fishing. His family, the Kamakeʻeʻāinas, were a well known fishing family in the area, and stories can still be found today of their abilities in fishing. To the south of town is Pounders Beach, named for the pounding shorebreak. The name change occurred in the 1950s, when a group of students at the Church College of the Pacific (now Brigham Young University–Hawaii) called the beach "Pounders" after the shorebreak that provided popular bodysurfing rides; the nickname stuck. Another bodysurfing beach is Hukilau Beach, located at the north end of town, at the mouth of Kahawainui Stream. 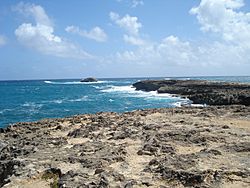 Lāʻie Point overlooking the Pacific Ocean to the east

There were 903 households, out of which 46.4% had children under the age of 18 living with them, 66.2% were married couples living together, 10.9% had a female householder with no husband present, and 18.6% were non-families. 9.1% of all households were made up of individuals, and 2.1% had someone living alone who was 65 years of age or older. The average household size was 4.47 and the average family size was 4.75.

Lāʻie is within the Hawaii Department of Education. Lāʻie Elementary School is in the CDP.

All content from Kiddle encyclopedia articles (including the article images and facts) can be freely used under Attribution-ShareAlike license, unless stated otherwise. Cite this article:
Laie, Hawaii Facts for Kids. Kiddle Encyclopedia.