Lanesboro is a city in Fillmore County, Minnesota, United States. The population was 754 at the 2010 census. It was named after F. A. Lane, an early landowner.

The Root River flows through it, with a waterfall on the edge of town. The Root River State Trail and other bike paths also serve the town. An Amish community is in the area and the town is home to many unique shops and restaurants, and a new theater.

Lanesboro was platted in 1868. A post office was established as Lanesborough in 1868, and the name was changed to Lanesboro in 1883. The city was named for one of its founders, F. A. Lane.

According to the United States Census Bureau, the city has a total area of 1.32 square miles (3.42 km2), all of it land.

Minnesota State Highways 16 and 250 and County Roads 8 and 21 are four of the main routes in Lanesboro.

Lanesboro is one of several towns intersected by the Root River segment of the Blufflands State Trail.

Lanesboro received the Great American Main Street Award in 1998. Author John Villani named the community one of the 100 Best Small Art Towns in America. It has also been rated one of the "50 Best Outdoor Sports Towns" by Sports Afield magazine.

Crown Trout Jewelers of Lanesboro was a finalist in the 2002 International Gold Virtuosi Jewelry Design Competition, one of four American jewelry studios given that distinction from 5200 total entries.

Most recently, Outside Magazine featured the community as one of the "20 Best Dream Towns in America". 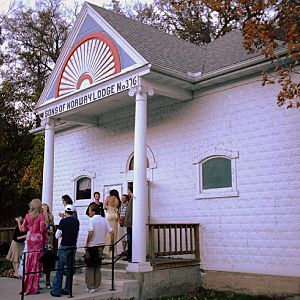 Since 1989, Lanesboro has been home to the Commonweal Theatre Company, a professional ensemble dedicated to celebrating the human condition through actor-based storytelling. Each year, the Commonweal offers 4-6 plays ranging from Ibsen to family-friendly entertainment to holiday classics. During the summer months, two plays run in repertory, giving visitors the opportunity to see two different shows during their stay. The Commonweal, in cooperation with area businesses and organizations, hosts an annual Ibsen Festival celebrating Norwegian art and culture through workshops, lectures, food, and featuring Commonweal's production of an Ibsen play. A live one-hour radio show, "Over the Back Fence," is broadcast each Sunday evening from the theater during the summer months with tickets sold at the door. On July 7, 2007, the Commonweal opened a new theater facility called The Commonweal. This $3.5 million home seats 191 patrons in a thrust auditorium with an exterior designed to complement historic Lanesboro. The interior design was coordinated by area artist Karl Unnasch with regional elements such as reclaimed barn stone and lumber, cement floors and a permanent installation of area objects.

The Lanesboro Arts Council and Cornucopia Art Center merged to create Lanesboro Arts in 2010. Their gallery building, in downtown Lanesboro, features a spacious juried sales gallery and a traveling exhibition gallery, both of which showcase the work of more than 100 individual regional artists to more than 20,000 visitors annually, some as far as Saudi Arabia, Korea, China, Israel and Kenya. The St. Mane Theater is owned and operated by Lanesboro Arts, and is right next door to the Commonweal, giving Lanesboro a bonafide Theater District. It’s the home to several community theater productions throughout the year, as well as the Over the Back Fence community variety show (monthly from March through November), and other performing arts events and independent film screenings.

Every Father's Day in June, an art festival dubbed "Art in the Park" fills the town's Sylvan Park. Near summer's end, the popular "Buffalo Bill Days" celebrates one of Lanesboro's famous frequent visitors, Buffalo Bill. As the town's tourist popularity grows, more festivals and get-togethers are being added to the town's busy schedule of events.

In 2008, the governor of Minnesota declared Lanesboro the Rhubarb Capital of Minnesota. The first weekend in June Lanesboro hosts a Rhubarb Festival. In 2007, Garrison Keillor broadcast A Prairie Home Companion from the Lanesboro softball field and featured stories and songs about rhubarb.

Every Wednesday and Saturday during the growing season, the Lanesboro Farmers' Market can be found in Sylvan Park.

The town and a fictional museum were mentioned in an episode of Brothers & Sisters on October 19, 2008. 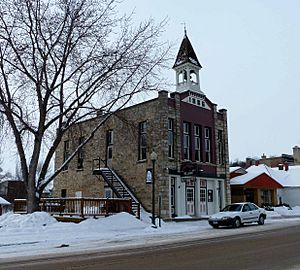 The Old Village Hall, listed on the National Register of Historic Places as part of the Lanesboro Historic District.

There were 373 households of which 20.4% had children under the age of 18 living with them, 45.6% were married couples living together, 6.7% had a female householder with no husband present, 3.2% had a male householder with no wife present, and 44.5% were non-families. 38.9% of all households were made up of individuals and 19.3% had someone living alone who was 65 years of age or older. The average household size was 2.02 and the average family size was 2.67.

There were 384 households out of which 19.8% had children under the age of 18 living with them, 51.0% were married couples living together, 4.4% had a female householder with no husband present, and 42.4% were non-families. 37.5% of all households were made up of individuals and 21.9% had someone living alone who was 65 years of age or older. The average household size was 2.05 and the average family size was 2.70.

All content from Kiddle encyclopedia articles (including the article images and facts) can be freely used under Attribution-ShareAlike license, unless stated otherwise. Cite this article:
Lanesboro, Minnesota Facts for Kids. Kiddle Encyclopedia.