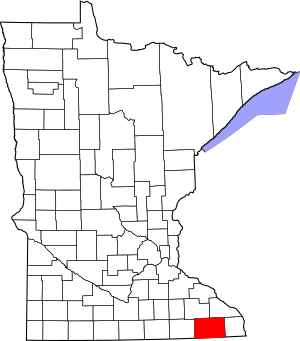 Location of Fillmore County in Minnesota

There are 36 properties and districts listed on the National Register in the county.

Fillmore County's National Register properties reflect its development as an agricultural region typical of Southeast Minnesota. Euro-American settlement began in the 1850s and initially relied on rivers and stagecoach roads for transportation. The Forestville Townsite, now a living history museum, preserves a portion of one of these early communities. Several towns vied for county seat status; the William Strong House in Carimona and the Fillmore County Jail and Carriage House in Preston were nominated as the best surviving structures representing this period.

Fillmore County's many rivers and streams powered a milling region of statewide importance before Minneapolis achieved primacy. Additionally, properties like the Quickstad Farm Implement Company and Rushford Wagon and Carriage Company represent the agricultural focus of manufacturing in the county. The Gilded Age prosperity of population centers like Spring Valley and Chatfield is reflected by other listings, several of which are noted for their architecture.

All content from Kiddle encyclopedia articles (including the article images and facts) can be freely used under Attribution-ShareAlike license, unless stated otherwise. Cite this article:
National Register of Historic Places listings in Fillmore County, Minnesota Facts for Kids. Kiddle Encyclopedia.