Rushford is a city in Fillmore County, Minnesota, United States. The population was 1,731 at the 2010 census.

The first pioneers pole-boated up the Root River to the junction of Rush Creek, peering through 10-foot tall grasses to see what astonishing beauty the bluff lands had to offer. The early settlers gave Rushford its name on Christmas Day in 1854, during a chicken supper hosted by Capt. Dyer. The name stems from the nearby Rush Creek, which had tall Rushes growing along its banks. The area was once referred to as “Trail City” because seven Indian trails met at the creek.

Rushford has had a post office in operation since 1856, and the 1867 two-story Railroad Depot still stands at its original site, being restored as a Visitors Center for the local area. - See more at: http://www.lakesnwoods.com and http://www.bluffcountry.com/.

As a result of the 2007 Midwest flooding, the city was flooded when Rush Creek overtopped the dikes. Rushford's spirit bounced back to produce a very bustling and thriving community. 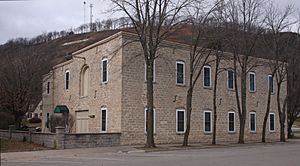 Rushford Wagon and Carriage Company, now an apartment building, with "Rushford" on the side of the bluff behind it.

Rushford is located in southeastern Minnesota's Bluff Country, part of the driftless area. Magelssen's Bluff, a 440-foot hill directly over the town, has the town name written in large white letters on the side of the hill. 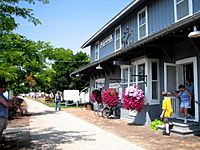 Every five years, Rushford holds a city-wide Homecoming celebration, with a standing invitation to all former residents of the city to return and visit. The town also hosts an annual celebration formerly called "Frontier Days," now called "Rushford Days."

Rushford is one of several towns intersected by the Root River segment of the Blufflands State Trail, a Rails to Trails project linking several small towns along 42 miles of former railroad grade. The historic Rushford Depot (pictured to the right) is a landmark along this trail, with a museum inside the old depot and other historic buildings on the grounds.

Rushford also has several parks and a public swimming pool.

There were 706 households of which 31.7% had children under the age of 18 living with them, 50.8% were married couples living together, 10.9% had a female householder with no husband present, 2.8% had a male householder with no wife present, and 35.4% were non-families. 30.9% of all households were made up of individuals and 17.3% had someone living alone who was 65 years of age or older. The average household size was 2.35 and the average family size was 2.93.

There are 704 households out of which 29.3% have children under the age of 18 living with them, 52.1% are married couples living together, 8.1% have a female householder with no husband present, and 38.4% are non-families. 34.8% of all households are made up of individuals and 22.2% have someone living alone who is 65 years of age or older. The average household size is 2.26 and the average family size is 2.93.

All content from Kiddle encyclopedia articles (including the article images and facts) can be freely used under Attribution-ShareAlike license, unless stated otherwise. Cite this article:
Rushford, Minnesota Facts for Kids. Kiddle Encyclopedia.