Lauderdale is a town on the outskirts of Hobart, capital of Tasmania, Australia. The population of Lauderdale is approximately 2,388 (2006 census). It is in the local government area of City of Clarence. The town is situated on the eastern side of a thin isthmus that connects the South Arm Peninsula to the mainland. It faces Ralphs Bay, and the majority of Lauderdale's population live along Roches Beach, which faces Frederick Henry Bay. Along with nearby Seven Mile Beach, it is a popular residential area for people working in the Hobart CBD. 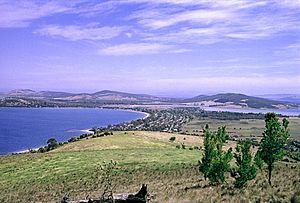 The view also shows the nearby ABC radio transmitter mast. The Ralphs Bay side of Lauderdale reveals a sharp gradient in the bay where the water changes colour. This change can be especially noticeable when driving along the main road from Hobart.

Walker Corporation had plans to build a large residential 'canal estate' in Ralphs Bay in front of Lauderdale. There were many protests against the development on ecological grounds; the development would be over sensitive mud flats and affect the habitat of migratory birds and the endangered spotted handfish. Former State Premier Paul Lennon was very much in favour of the development whilst acting as premier. He has close relations with Walker Corp. In June 2010, Ralphs Bay was saved when the Tasmanian Planning Commission rejected the proposed 'Lauderdale Quay' canal housing development. However the Legislative Council of the Tasmanian Parliament debated the Canal Estates (Prohibition) Bill 2011 on 7 July 2012 and voted against this legislation. So while the Ralphs Bay development will not go ahead the way is still open to other developments.

Lauderdale has a primary school and childcare centre, along with a Christian church (Abundant Life Church).

All content from Kiddle encyclopedia articles (including the article images and facts) can be freely used under Attribution-ShareAlike license, unless stated otherwise. Cite this article:
Lauderdale, Tasmania Facts for Kids. Kiddle Encyclopedia.