Le Dieu Bleu (English: The Blue God) is a ballet in one act. Jean Cocteau and Federico de Madrazo y Ochoa wrote the story of the ballet. Reynaldo Hahn wrote the music. Michel Fokine designed the dances, and Léon Bakst designed the sets and costumes. The ballet was first performed in Paris at the Théâtre du Châtelet on 13 May 1912. It was a failure. Critics thought Nijinsky – the dancer for whom the ballet was designed – did more posing than dancing. Producer Sergei Diaghilev blamed Hahn's music for the failure. Le Dieu Bleu was staged three times in Paris in 1912 and three times in London in 1913. The ballet has not been revived.

Ballet impresario and producer Sergei Diaghilev staged two exotic ballets for the Ballets Russes: Cléopâtre in 1909 and Schéhérazade in 1910. Both were great successes with the Parisian public. He hoped that Le Dieu Bleu (another exotic ballet) would be equally successful.

Dieu was one of six new ballets for the 1911 Ballets Russes season. The others were Narcisse, La Peri, Le Spectre de la Rose, Sadko, and Petrushka. Michel Fokine would design the dances for all of them. Léon Bakst would design the sets and costumes for the first four. When Fokine and Bakst started work on Ida Rubinstein's ballet Le Martyre de Saint Sébastien, Diaghilev felt betrayed. He pushed Dieu forward to 1912. He lost interest in Dieu, but spent huge amounts of money on the production. He hoped Dieu would make Nijinsky a great international star.

Fokine started work on Dieu in St Petersburg in the winter of 1911-1912. He based some of his ideas for the ballet on the dances of the Royal Siamese Court ballet. This company had danced in St Petersburg in 1900. Fokine also made a study of the arts of India. In the end though , his dances for Dieu were dull.

Hahn's music could have been the reason. It was not very good. Prince Lieven, a critic and historian of the Ballets Russes, said the music had no interest or importance. He said that it was "sweet and insipid". Bakst based his ideas for the sets and costumes on the printed materials for the Cambodian Ballet's 1906 performances in France.

The ballet was first presented by Diaghilev's Ballets Russes in Paris at the Théâtre du Châtelet on 13 May 1912. Another ballet, Thamar, was also on the program. Both ballets were failures. Diaghilev was shocked by the failure of Thamar. He thought it would be another success like Schéhérazade. He was not surprised that Dieu was a failure. He privately blamed Hahn's music for its failure. The music was dull. He was forced to use it because Hahn had rich friends in Paris. They would have cut their support of the Ballets Russes if the music had been turned down.

The ballet was designed for Nijinsky. He had yet to dance an important part for the Ballets Russes. He was cast as The Blue God. Diaghilev hoped The Blue God would make the dancer an internationally famous star. Other dancers in the ballet were Max Frohman as The Young Man, Tamara Karsavina as The Young Girl, Lydia Nelidova as The Goddess, and Michel Federov as The High Priest. Nijinsky's sister Bronislava Nijinska was cast as The Drunken Temple Dancer. 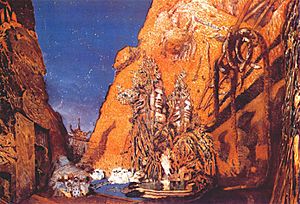 The curtain rises on a warm evening in India a long time ago. In front of a temple of rock, a pool is seen with a lotus on the surface of the water. Snakes and other animals rest near the pool. The temple walls are covered with masses of flowering plants. People are waiting for a ceremony to take place. The Young Man is about to become a priest of the temple. The Young Girl runs in. She kneels at the feet of The Young Man. She does not want him to desert her for the life of a priest. She dances before him. The priests are shocked. They lead The Young Man out. They prepare The Young Girl for death.

What people thought about the ballet 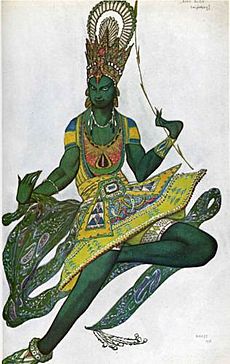 Diaghilev hoped that Dieu would be a great success. It was not. People thought Nijinsky's talent had been wasted. They said that he posed more than he danced. What people liked the most about the ballet was Bakst's sets and costumes. Valery Svetlov wrote in the Mercure de France on 15 May 1912 that Dieu was "a failure in every sense of the word." The ballet was presented three times in Paris in 1912 and three times in London in 1913. Bakst's costumes and set were revived for a week-long Diaghilev Festival directed and staged by Andris Liepa in London, April 2011, with new choreography by Wayne Eagling to music by Scriabin. The role of the Blue God was played by Nikolai Tsiskaridze. This production was also not well received.

All content from Kiddle encyclopedia articles (including the article images and facts) can be freely used under Attribution-ShareAlike license, unless stated otherwise. Cite this article:
Le Dieu Bleu Facts for Kids. Kiddle Encyclopedia.