Lewis Township is a township in Lycoming County, Pennsylvania, United States. The population was 987 at the 2010 census, down from 1,139 at the 2000 census. It is part of the Williamsport Metropolitan Statistical Area.

Lycoming Creek which begins to the north of Lewis Township in McNett Township also served as a highway of sorts during the colonial era of Pennsylvania's history. The stream was used by early explorers and the Native Americans in the area as a means of travel. They were able to float their canoes down the creek and into the West Branch Susquehanna River. This mode of transportation was considerably faster than walking the path. Conrad Weiser guided Moravian missionaries along the creek and path to reach Onondaga the capital of the Iroquois Confederacy in 1737. Raiding parties of Indian warriors used the creek and path in 1770 when conducting attacks on the West Branch Susquehanna Valley strongholds of Fort Muncy and Fort Freeland. Colonel Thomas Hartley led the 6th Pennsylvania Regiment up the Sheshequin Path during the American Revolution. Hartley's expedition in 1778 preceded the Sullivan Expedition of 1779. Both Hartley and Sullivan were instrumental in claiming the frontier of Pennsylvania and New York for the forces of the Continental Army. As Hartley and his men passed through Lewis Township the Sheshequin path was widened. The widening of the path helped to open this area to settlement in the years following the Revolution. 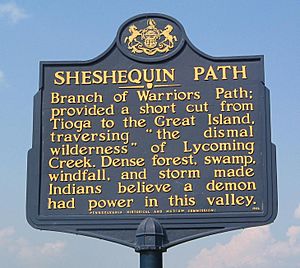 Lewis Township was largely uninhabited until after the Revolutionary War. A squatter named A.M. Slack is believed to have been the first permanent settler. He built a cabin and cleared some land in the area that is now the village of Bodines. The village of Trout Run has its beginnings during the construction of the Williamson Road. This road which stretched from Williamsport, Pennsylvania to Painted Post, New York helped to open north central Pennsylvania to settlement. Charles Williamson, the builder of the road, established a supply depot at Trout Run.

Much of Lewis Township is covered with steep slopes that were carved into the Allegheny Plateau by the streams that drain into the West Branch Susquehanna River. The geography of the township has limited the development of the township. A narrow valley along Lycoming Creek is where most of the settlement of Lewis Township has occurred. James Kyle arrived in the area sometime around 1800. He owned 260 acres (1.1 km2) along Lycoming Creek. Kyle took out an advertisement in the Lycoming Gazette. The ad placed on March 14, 1810 read as follows.

Kyle's farm was eventually sold to Robert Allen. Robert and his family were among the most successful and prominent early settlers. Allen was born in Northumberland on August 6, 1797. His father, John Allen, was a native of County Down, Ireland and his mother was from Scotland. John Allen moved from Northumberland to a section of land along Lycoming Creek between Cogan Station and Hepburnville in Hepburn Township. He died in 1819 and his farm was divided among his children. Robert Allen sold his share of the farm to his brothers and moved further north along Lycoming Creek and bought the land that was formerly owned by James Kyle. Allen and his wife Mary Ann Hews improved the Kyle Farm. They rose to a position of prominence as the owners of an inn that was frequently busy with visitors who were moving along the Williamson Road. Allen was also employed as a surveyor and civil engineer. He spent several years working for the United States Government in the Northwest Territory especially in what is now Michigan along the Detroit River and Lake Huron. Allen died in 1849 and his wife died in 1883. Her parents Henry and Martha Hews were part of the failed "English Settlement" in Pine Township. They had migrated to Pennsylvania from Chard, Somerset, England. After struggling the survive in Pine Township, Henry Hews cleared and established several successful farms in Tioga County and northern Lycoming County before finally settling near Trout Run where his daughter met and married Robert Allen.

Lewis Township has changed little over the years. The population has risen to 1,139 as of the 2000 census up from 985 in the census of 1890. Trout Run is on U.S. Route 15 which follows the old Williamson Road. This highway is currently part of the Interstate 99 project.

The Bridge in Lewis Township was added to the National Register of Historic Places in 1988.

According to the United States Census Bureau, the township has a total area of 37.8 square miles (98.0 km2), all of it land.

There were 451 households, out of which 29.9% had children under the age of 18 living with them, 53.0% were married couples living together, 11.1% had a female householder with no husband present, and 32.4% were non-families. 25.1% of all households were made up of individuals, and 7.5% had someone living alone who was 65 years of age or older. The average household size was 2.53 and the average family size was 3.00.

All content from Kiddle encyclopedia articles (including the article images and facts) can be freely used under Attribution-ShareAlike license, unless stated otherwise. Cite this article:
Lewis Township, Lycoming County, Pennsylvania Facts for Kids. Kiddle Encyclopedia.