The Lilac Bloomsday Run, also known as Bloomsday, is an annual timed road race in the northwest United States, held on the first Sunday of May since 1977 in Spokane, Washington. The course length is 12 km (7.456 mi).

Don Kardong, who founded the Bloomsday race, cites James Joyce's 1922 novel Ulysses as the inspiration for the name Bloomsday.

Kardong had hoped for five hundred participants for the inaugural edition in 1977, and got nearly triple that. The second edition had over five thousand, and the third in 1979 was over ten thousand, with fifty thousand spectators lining the streets. The sixth edition in 1982 had over 22,000, and despite rain and some snow, there were over 30,000 in 1984.

The early editions were around eight miles (12.9 km) in length. A new course was introduced in 1980.

The course starts in Downtown Spokane and heads northwest along the far west end of town, passes by Mukogowa Ft. Wright Institute and Spokane Falls Community College before heading up "Doomsday Hill" and back downtown past the Spokane County Courthouse and ending at the Monroe Street Bridge. Every finisher of the race receives a Bloomsday T-shirt. 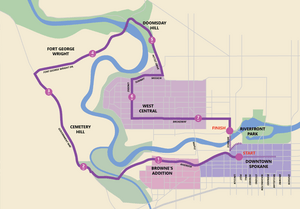 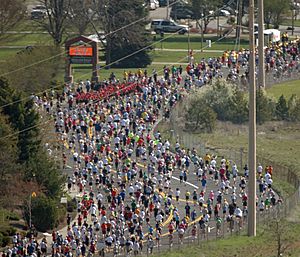 All content from Kiddle encyclopedia articles (including the article images and facts) can be freely used under Attribution-ShareAlike license, unless stated otherwise. Cite this article:
Lilac Bloomsday Run Facts for Kids. Kiddle Encyclopedia.