Lincoln is a city in Logan County, Illinois, United States. It is the only town in the United States that was named for Abraham Lincoln before he became president; he practiced law there from 1847 to 1859. First settled in the 1830s, Lincoln is home to three colleges and two prisons. The three colleges are Lincoln College, Lincoln Christian University, and Heartland Community College. It is also the home of the world's largest covered wagon.

The town was officially named on August 29, 1853, in an unusual ceremony. Abraham Lincoln, having assisted with the platting of the town and working as counsel for the newly laid railroad which led to its founding, was asked to participate in a naming ceremony for the town. On this date, the first sale of lots took place in the new town. Ninety were sold at prices ranging from $40 to $150. According to tradition Lincoln was present. At noon he purchased two watermelons and carried one under each arm to public square. There he invited Latham, Hickox, and Gillette, proprietors, to join him, saying, "Now we'll christen the new town.", squeezing watermelon juice out on the ground. Legend has it that when it had been proposed to him that the town be named for him, he had advised against it, saying that in his experience, "Nothing bearing the name of Lincoln ever amounted to much." The town of Lincoln was the first city named after Abraham Lincoln, while he was a lawyer and before he was President of the United States.

Lincoln College (chartered Lincoln University), a private four-year liberal arts college, was founded in early 1865 and granted 2 year degrees until 1929. News of the establishment and name of the school was communicated to President Lincoln shortly before his death making Lincoln the only college to be named after Lincoln while he was living. The College has an excellent collection of Abraham Lincoln related documents and artifacts, housed in a museum which is open to the general public.

The City of Lincoln was located directly on U.S. Route 66 from 1926 through 1978. This is its secondary tourist theme after the connection with Abraham Lincoln.

American author Langston Hughes spent some of his early years in Lincoln. Later on, he was to write to his eighth-grade teacher in Lincoln, telling her his writing career began there in the eighth grade, when he was elected class poet.

American theologians Reinhold Niebuhr and Helmut Richard Niebuhr lived in Lincoln from 1902 through their college years. Reinhold Niebuhr first served as pastor of a church when he served as interim minister of Lincoln's St. John's German Evangelical Synod church following his father's death. Reinhold Niebuhr is best known as the author of the Serenity Prayer.

The City of Lincoln features the stone, three-story, domed Logan County Courthouse (1905). This courthouse building replaced the earlier Logan County Courthouse (built 1858) where Lincoln once practiced law; the earlier building had fallen into serious decay and could not be saved. In addition, the Postville Courthouse State Historic Site contains a 1953 replica of the original 1840 Logan County courthouse; Postville, the original county seat, lost its status in 1848 and was itself annexed into Lincoln in the 1860s.

Lincoln was also the site of the Lincoln Developmental Center (LDC); a state institution for the developmentally disabled. Founded in 1877, the institution was one of Logan County's largest employers until closed in 2002 by former Governor George Ryan due to concerns about patient maltreatment. Despite efforts by some Illinois state legislators to reopen LDC, the facility remains shuttered.

According to the 2010 census, Lincoln has a total area of 6.4 square miles (16.58 km2), all land. Lincoln's Amtrak train station is on the Amtrak line between St. Louis and Chicago. Lines of the Union Pacific and Canadian National railroads run through the city. Salt Creek (Sangamon River Tributary) and the Edward R. Madigan State Fish and Wildlife Area are nearby. 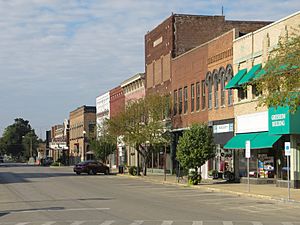 There were 5,965 households out of which 28.4% had children under the age of 18 living with them, 46.7% were married couples living together, 11.6% had a female householder with no husband present, and 38.1% were non-families. 33.1% of all households were made up of individuals and 15.8% had someone living alone who was 65 years of age or older. The average household size was 2.28 and the average family size was 2.89.

All content from Kiddle encyclopedia articles (including the article images and facts) can be freely used under Attribution-ShareAlike license, unless stated otherwise. Cite this article:
Lincoln, Illinois Facts for Kids. Kiddle Encyclopedia.