Lincoln Center, more commonly known as Lincoln, is a city in and the county seat of Lincoln County, Kansas, United States. As of the 2010 census, the city population was 1,297. 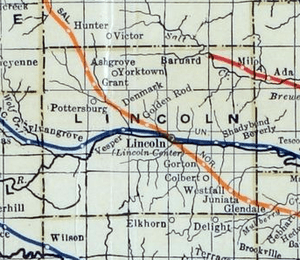 Settler George Green founded the town of Lincoln in 1870, naming it after the county. "Center" was added to its name to indicate its location in the central part of the county. County residents initially voted to place the county seat in Lincoln Center. However, elections in November 1870 resulted in the seat relocating to nearby Abram, sparking a county seat war. Another vote in February 1872 reversed the switch, and Lincoln Center became the permanent county seat. In addition, residents relocated all the buildings in Abram to Lincoln, merging the two communities. The town was incorporated as the city of Lincoln Center in 1879, and is still officially referred to as such in the United States Census. However, both the city government and local chamber of commerce refer to the city as Lincoln, and it appears as such on state maps and signs.

Lincoln grew rapidly over the following decade, more than doubling in size, and the city gradually modernized. Kansas Christian College opened in Lincoln in 1885. The Union Pacific Railroad opened a branch line through the city in 1886, bringing mail service. In 1900, after the previous courthouse burned down, a new one was built out of native limestone known locally as "post rock". Rural mail delivery began in 1904, and telephony service began in 1905. In 1906, the city's first power plant opened, providing electric power. By 1950, the state highway commission had completed K-14 and K-18 through Lincoln.

In 1989, given the widespread, long-standing use of post rock limestone in local building construction, the Kansas Legislature named Lincoln County as "The Post Rock Capital of Kansas".

According to the United States Census Bureau, the city has a total area of 1.24 square miles (3.21 km2), all of it land.

Lying in the transition zone between North America's humid subtropical climate (Köppen Cfa) and humid continental climate (Köppen Dfa), Lincoln Center experiences hot, humid summers and cold, dry winters. The average temperature is 55.1 °F (12 °C), and the average yearly precipitation is 27.4 inches (69 cm). Snowfall averages 19.3 inches (49 cm) per year. On average, July is the warmest month, January is the coldest month, and May is the wettest month. The hottest temperature recorded in Lincoln was 117 °F (47 °C) in 1947; the coldest temperature recorded was -27 °F (-33 °C) in 1989.

There were 576 households of which 24.1% had children under the age of 18 living with them, 43.2% were married couples living together, 9.5% had a female householder with no husband present, 3.5% had a male householder with no wife present, and 43.8% were non-families. 40.6% of all households were made up of individuals, and 20.1% had someone living alone who was 65 years of age or older. The average household size was 2.16, and the average family size was 2.95.

All content from Kiddle encyclopedia articles (including the article images and facts) can be freely used under Attribution-ShareAlike license, unless stated otherwise. Cite this article:
Lincoln Center, Kansas Facts for Kids. Kiddle Encyclopedia.