List of fish in the River Trent facts for kids 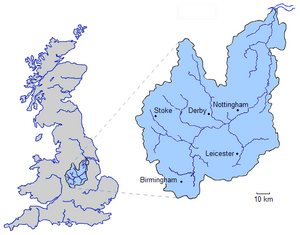 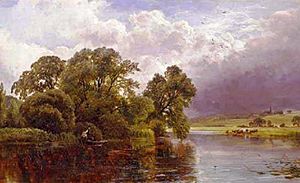 The impressive diversity of fish species in this river has been known (and celebrated) since 1590, with poetry containing the earliest mention that the Trent contains 30 kinds of fish. The earliest actual list of fish in the river is from 1641. Over the centuries some species have since become locally extinct, and other species have been introduced.

The earliest known list of fish from the River Trent was from 1641. Although the list contains thirty names, one of them is not a fish by modern standards, but an edible crustacean, the Crayfish. The list also includes some fish names that no longer exist in modern English, such as "Frenches" and "Lenbrood"; these species are therefore currently unidentifiable. 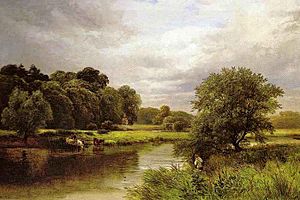 Fishing on the Trent near Ingleby by George Turner, 1850

The 1641 list of 30 species (verbatim, note antique spelling of some names):

Note on the sturgeon

The largest of these fish was the sturgeon, a species which at one time was fairly frequently caught in the Trent, but only in low numbers. Notable examples included a sturgeon of eight feet taken near Donington castle in 1255, and another at nearby King's Mill of seven feet in 1791. The last known catch was in 1902 near Holme, Nottinghamshire; the fish was eight and a half feet long and weighed 250 pounds.

In 1676 in Izaak Walton described the River Trent as "One of the finest rivers in the world and the most abounding with excellent salmon and all sorts of delicate fish."

Walton also speculated (incorrectly) that the name of the River Trent might be based on the number of fish species, that the Trent is "... so called from thirty kind of fishes that are found in it, or for that it receiveth thirty lesser rivers".

In 1751, Charles Deering provided a list of 34 kinds, under the title An alphabetical list of all the fish catch’d in the River Trent. This listed read (verbatim);

This list also includes several unrecognizable fish. It also lists three different names for salmon, as well as "Whitling", which is a name for a young male trout, and "Muscle", which is probably a reference to freshwater mussels, formerly used as food in some areas.

In 1985, a study of anglers' catches stated that the ‘Trent supports about 40 species’, but they were not listed. The fish that were caught most often, and were important to anglers, included barbel, bream, bleak, carp, chub, dace, eel, gudgeon, perch, and roach.

Non-native species that had a sustainable population in the river were listed in 2007, and included the European bitterling (Rhodeus amarus), carp (Cyprinus carpio), and zander (Sander lucioperca).

This list is based on Deering's 1829 list. It includes the locally extinct species as well as the more recent additions, but it does not claim to be fully comprehensive; other species may occur in the river but are as yet undocumented.

All content from Kiddle encyclopedia articles (including the article images and facts) can be freely used under Attribution-ShareAlike license, unless stated otherwise. Cite this article:
List of fish in the River Trent Facts for Kids. Kiddle Encyclopedia.