List of mayors of Portland, Oregon facts for kids 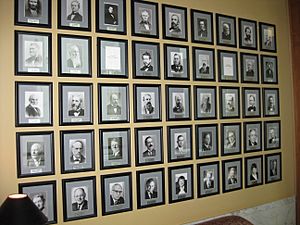 Gallery of the mayors of Portland

This is a list of mayors of the city of Portland, Oregon. Under Portland's system of government, members of the City Council (known as Commissioners) have many duties that are generally the domain of a mayor.

The current term for mayor of Portland is four years. Mayoral elections are held in May of US presidential election years (years divisible by four), during the Oregon primary election, with a runoff between the top two vote-getters held in November of the same year should no candidate garner a majority vote in the May election. The mayor-elect takes office the following January.

Note: The color shown in the number (#) column denotes political party (red for Republican, blue for Democratic, teal for the People's Party (or Populist), gray for Independent, and none for unknown), but it must be noted that Mayor of Portland is a nonpartisan office.

The City of Portland mayor's office, in the City Hall, contains a collection of mounted portraits of all the mayors to date. As of November 2014 only two mayors are missing from the collection; William H. Farrar (1862–1863), and Hamilton Boyd (1868–1869).

All content from Kiddle encyclopedia articles (including the article images and facts) can be freely used under Attribution-ShareAlike license, unless stated otherwise. Cite this article:
List of mayors of Portland, Oregon Facts for Kids. Kiddle Encyclopedia.