List of tallest buildings in Nashville facts for kids

Skyline of Nashville in 2018 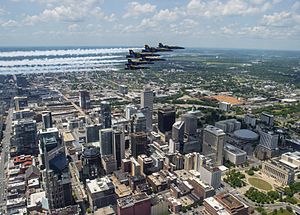 US Navy Blue Angels over Nashville in 2020

High-rise buildings first appeared in Nashville with the construction of the First National Bank Building, now the Downtown Courtyard Hotel, in 1905; this building rises 168 feet (51 m) and 12 floors. As of February 2021, there are 162 completed high-rises in the city. Twenty high-rises have been completed in the past three years, with another twenty currently in construction, fifteen approved, and another 25 high-rises approved and proposed. Nashville has demonstrated quick approval of many major projects, such as One22One. It was announced in February 2019, with the previous building demolished and ground breaking expected in September 2019.

This list ranks Nashville skyscrapers completed or structurally topped out that stand at least 260 feet (80 m), based on standard height measurement.

Buildings approved that are currently under construction, in site prep, or demolition phase. Buildings listed are planned to rise above 260 feet (80 m) include:

These buildings have either been issued permits and approved, or buildings that are in its planning stage that stand 260 feet (80 m) using standard measurement.

This lists buildings that once held the title of tallest building in Nashville. The first skyscraper in the city was the First National Bank Building, now the Courtyard Hotel, from 1905 until 1908.

All content from Kiddle encyclopedia articles (including the article images and facts) can be freely used under Attribution-ShareAlike license, unless stated otherwise. Cite this article:
List of tallest buildings in Nashville Facts for Kids. Kiddle Encyclopedia.