List of tallest buildings in San Diego facts for kids 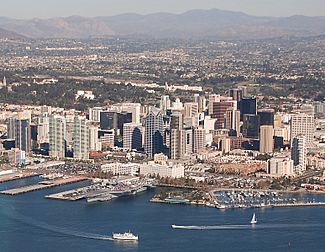 Downtown San Diego skyline from the air in November 2008

I believe that our skyline is a collective composition of many buildings. We don't have to have one landmark like the Empire State Building or Petronas towers. I think the landmark is the entire Downtown.

—Garry Papers, manager of architecture and planning for the Center City Development Corporation

San Diego has over 150 high-rises, mainly in the downtown district. In the city, there are 37 buildings that stand taller than 300 feet (91 m). In the 1970s, the Federal Aviation Administration (FAA) began restricting downtown building height to maximum of 500 feet (152 m) within a 1.5-mile (2.4 km) radius of San Diego International Airport's single runway. The tallest building in the city is the 34-story One America Plaza, completed in 1991, which stands 500 feet (152 m) tall.

The history of skyscrapers in San Diego began with the completion of the U.S. Grant Hotel in 1910. The building, at a height of 211 feet (64 m), remained the tallest building in San Diego until 1927, when the El Cortez Hotel at 310 feet (94 m) took its place. The skyscraper's height was surpassed in 1967 by the Union Bank of California Building, which stood as the tallest building for two decades with its height of 388 feet (118 m). In 1989, with a height of 499 feet (152 m), Symphony Towers gained the title, before being passed two years later by One America Plaza. During the 1990s, the city was compared to a "handful of tools in a scarcely stocked toolbox" and a "mouth with a lot of missing teeth". Development in the late 1990s and 2000s led to many new high-rises, mainly residential skyscrapers. Many of these new residential buildings are pairs of twin towers. 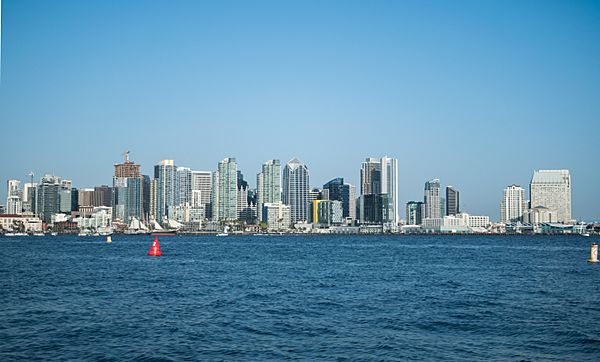 This list ranks San Diego skyscrapers that stand at least 300 feet (91 m) tall, based on standard height measurement. This includes spires and architectural details but does not include antenna masts. The "Year" column indicates the year in which a building was completed.

This lists buildings that once held the title of tallest building in San Diego (at least 300 feet (91 m) tall) as well as the current tallest building, One America Plaza.

All content from Kiddle encyclopedia articles (including the article images and facts) can be freely used under Attribution-ShareAlike license, unless stated otherwise. Cite this article:
List of tallest buildings in San Diego Facts for Kids. Kiddle Encyclopedia.