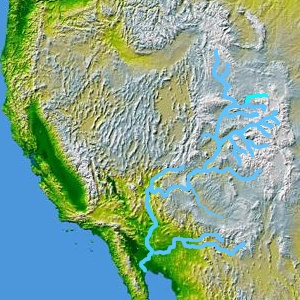 The Little Snake River, a tributary of the Yampa River, is shown highlighted on a map of the western United States

The Little Snake River is a tributary of the Yampa River, approximately 155 miles (249 km) long, in southwestern Wyoming and northwestern Colorado in the United States.

It rises near the continental divide, in Routt National Forest in northern Routt County, Colorado, along the northern edge of the Park Range. It flows west along the Wyoming-Colorado state line, meandering across the border several times and flowing past the Wyoming towns of Dixon and Baggs. It turns southwest and flows through Moffat County, Colorado, joining the Yampa approximately 45 mi (72 km) west of Craig, just east of Dinosaur National Monument. The Little Snake is not generally navigable except seasonally in years of plentiful water.

All content from Kiddle encyclopedia articles (including the article images and facts) can be freely used under Attribution-ShareAlike license, unless stated otherwise. Cite this article:
Little Snake River Facts for Kids. Kiddle Encyclopedia.