The community includes Llanybri and is bordered by the communities of: Laugharne Township; Llangynog; Llangain; St Ishmael; and Pembrey and Burry Port Town.

Llansteffan means "Llan of Saint Stephen", but honours a 6th-century Welsh associate of Saint Teilo rather than the more widely known protomartyr. 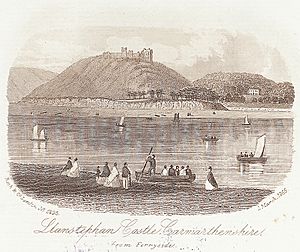 Llansteffan Castle, built by the Normans in the 12th century and granted to the Marmion family, stands above the village on a promontory commanding the estuary passage. Located between the ferry crossing-points of the Tywi and Tâf rivers, Llansteffan was an important staging post on the coastal route from Glamorgan via Kidwelly to Pembroke.

An electoral ward in the same name exists. This ward stretches north from Llansteffan to include Llangynog and Llangain, with a total population of 2,006.

All content from Kiddle encyclopedia articles (including the article images and facts) can be freely used under Attribution-ShareAlike license, unless stated otherwise. Cite this article:
Llansteffan Facts for Kids. Kiddle Encyclopedia.