Los Angeles Athletic Club (LAAC) is a privately owned athletic club and social club in Los Angeles, California, US. Established in 1880, the club is today best known for its John R. Wooden Award presented to the outstanding men's and women's college basketball player of each year.

The Los Angeles Athletic Club (LAAC) was founded on September 8, 1880. By the end of its first month of existence the fledgling club counted 60 enlisted members and was able to rent its first facility, two halls located in Stearns Hall on Los Angeles Street in downtown Los Angeles. A 19th Century history indicates that the club had the dual purposes of "providing its members with the means of physical development" along with "the advantages of a gentlemen's club. 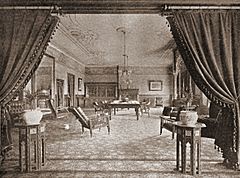 The club relocated for the first time in 1881, moving to more commodious accommodations in the Downey Block, before moving again a few years later to a still-larger home in the Stowell Block. A fire in 1893 required moving to temporary quarters in the Workman Block, next door to the previous Stowell Block location. Membership in this latter location soon topped the 400 mark, prompting the construction of the club's own permanent building, a four-story structure with a cavernous gymnasium located on an enlarged third floor. It was located on the east side of Spring Street between 5th and 6th, architects were McCarthy & Mendel.

The club provided a venue for gymnastics, athletic training, and team sports, including organization of a civic football team which played the inaugural intercity match with San Francisco in January 1892. During its first two decades of existence the club also established an outdoors athletic park, which included a running track and path for bicycling, a baseball diamond, tennis courts, and facilities for croquet. It also provided rooms designed for socialization, including an expansive reading room, as well as designated areas for billiards and cards.

In 1912 it moved into its own new Los Angeles Athletic Club Building at 431 West Seventh Street in Downtown Los Angeles. The twelve-story Beaux-Arts style clubhouse was designed for the LAAC by John Parkinson and George Bergstrom, and is a Los Angeles Historic-Cultural Monument. The building was notable for being the first in Southern California to have an interior swimming pool built on an upper floor.

Due to its position in the growth and development of Los Angeles, the LAAC had significant success during its first 60 years, with membership reflecting its position in Los Angeles society and early Hollywood culture. During its heyday, the LAAC founded a number of other institutions, including the California Yacht Club (1922) and Riviera Country Club (1926). They are now separate entities.

The club faced significant financial burdens due to World War II and the subsequent growth of suburbs.

Athletes from the LAAC have earned numerous medals in the Summer Olympics, with a particularly high number during the 1932 Los Angeles Olympiad. The total Olympic medal tally for the LAAC is 97 medals, including 47 gold.

All content from Kiddle encyclopedia articles (including the article images and facts) can be freely used under Attribution-ShareAlike license, unless stated otherwise. Cite this article:
Los Angeles Athletic Club Facts for Kids. Kiddle Encyclopedia.