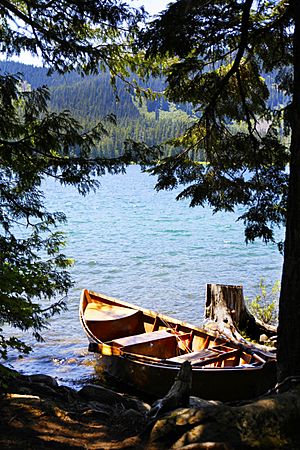 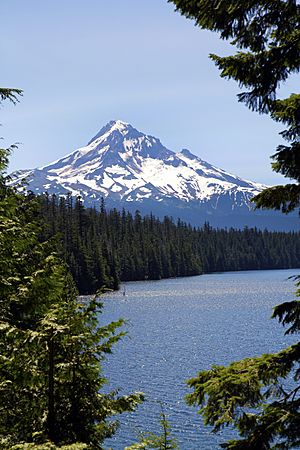 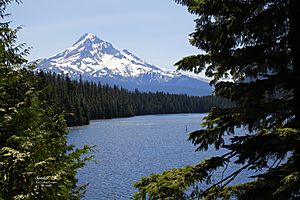 Windsurfer on Lost Lake with Mt Hood in the background

The lake is bounded on the east by 4,468-foot (1,362 m) Lost Lake Butte and on the southwest by 4,556-foot (1,389 m) Preachers Peak. The lake is fed by three unnamed intermittent creeks from Lost Lake Butte, and Inlet Creek from Preachers Peak. The lake maintains a very consistent level via an outlet at the north tip, the source of Lake Branch Hood River, a tributary of West Fork Hood River. It is the second-deepest lake in Mount Hood National Forest after Wahtum Lake at 167 feet (51 m).

The lake is a popular recreational site, with 125 primitive campsites seven rustic cabins and a rustic general store. The resort's normal season is May through October. Canoes, row boats, and kayaks are available for rental; motor craft are not allowed. A day use fee applies to all vehicles entering the area, payable to the concessionaire.

The area is a part of the proposed Lewis and Clark Mount Hood Wilderness which would prevent development, logging, mining, and possibly require the removal of structures and roads.

Native Americans called the lake E-e-kwahl-a-mat-yam-lshkt (heart of the mountains). The name Lost Lake came from Mack Hollamon, who was a hunting and fishing guide during the turn of the century. He had guided for many years through out Mount Hood but did not come across the lake until Native Americans later showed him where it was. So he called it Lost Lake on his future guides. He also named Dinger Lake and Frying Pan Lake.

All content from Kiddle encyclopedia articles (including the article images and facts) can be freely used under Attribution-ShareAlike license, unless stated otherwise. Cite this article:
Lost Lake (Hood River County, Oregon) Facts for Kids. Kiddle Encyclopedia.