Kids Encyclopedia Facts
This page is about the river in Idaho. For other uses, see Lost River (disambiguation). 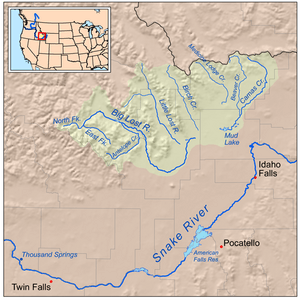 Map of the lost streams of Idaho

There are two rivers in Idaho named "Lost", the Big Lost River and the Little Lost River. They are often considered separate streams, but both flow into the same depression and become subterranean, feeding the Snake River Aquifer. The rivers are located in Custer County and Butte County, in Idaho in the United States. Via the aquifer and numerous springs, they are tributaries of the Snake River.

The sinks and the lower courses of both rivers are within the land of the Idaho National Laboratory, northeast of Craters of the Moon. Water from both rivers emerges about 100 miles (160 km) away at Thousand Springs near Hagerman and other springs downstream of Twin Falls. Due to irrigation using the aquifer's water, most of the rivers' water is pumped out of the ground, used to irrigate crops, and returned to the ground as irrigation drainage, where it eventually emerges at the springs and joins the Snake River.

All content from Kiddle encyclopedia articles (including the article images and facts) can be freely used under Attribution-ShareAlike license, unless stated otherwise. Cite this article:
Lost streams of Idaho Facts for Kids. Kiddle Encyclopedia.