The Lost River Range is a high mountain range of the Rocky Mountains, located in Central Idaho, in the Northwestern United States.

It runs southeast for approximately 75 miles (121 km) from the Salmon River near the community of Challis to the Snake River Valley near Arco. To the west are the valleys of the Salmon and the Big Lost Rivers, while to the east are the Little Lost River and Pashimeroi Valleys.

The range starts at the east bank of the Salmon River, at an elevation of about 5,000 feet (1,500 m). It quickly rises to Grouse Creek Mountain (11,085 ft, 3,378 m) and Dickey Peak (11,141 ft, 3,395 m), and then descends to Double Springs Pass, location of one of just two roads to cross the range. Nearby is an interpretive site explaining the effects of the magnitude 6.9 Borah Peak earthquake that hit the range on October 28, 1983. The Big Lost River Valley fell and the Lost River Range rose, leaving a fault scarp of up to 14 ft (4.3 m) along the base of the mountains. 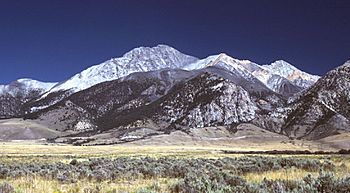 Panorama of the Upper Pashimeroi Valley, including Leatherman Peak (center)

The range then descends to Pass Creek Summit, the second road to cross its crest. It continues to King Mountain (10,612 ft, 3,235 m), a favorite site for hang gliders. Finally it descends sharply to the Snake River Valley near the community of Arco, at an elevation of 5,300 ft (1,600 m). 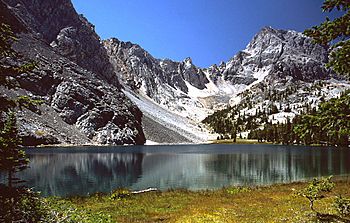 All content from Kiddle encyclopedia articles (including the article images and facts) can be freely used under Attribution-ShareAlike license, unless stated otherwise. Cite this article:
Lost River Range Facts for Kids. Kiddle Encyclopedia.