Luentinum or Loventium (Welsh: Llanio) was a fort and mining settlement in the Roman province of Britannia. It was associated with the Dolaucothi Gold Mines and its remains lie beneath the adjoining village of Pumsaint in the Welsh county of Carmarthenshire. It lay between similar forts at Llandovery and Bremia near Llanio, and some distance away from the fort at Llandeilo. The Roman road Sarn Helen linked Luentinum with Llanio and Llandovery. 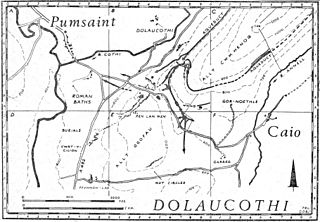 Map of the gold mine

Luentinum appears to have been founded as a square 5½ acre (2.25 hectare) Roman auxiliary fort controlling the adjoining gold mines, around AD 75 when Frontinus was governor of Roman Britain and active in subduing the Silures of Roman Wales. The fort had an earthen rampart and double ditch. The date of first construction was determined from a Samian ware inkwell with stamp in the early 1970s where the river bank had cut into the fort. On the east bank of the River Cothi, a few hundred yards south of Pumsaint village was discovered a small double-roomed building with hypocaust and plain tesselated floors. It was probably the military bath-house. The internal buildings of the fort underwent a number of rebuildings until the fort was abandoned around 140. The surrounding civilian vicus then took over the area and, no doubt, also the mines. The fort is situated about halfway between similar forts at Llandovery to the east and Bremia or Llanio to the west, with Llandeilo to the south.

The fort was at the meeting point of several Roman roads in mid Wales. These were the Ffordd Fleming which ran from Loventium to Menapia (St David's), the more southerly Via Julia which also came from St David's and met the Sam Helen near Loventium, and the Hen Fford (old road) which came from Maridunum (Carmarthen).

The name Luentinum appears only in Ptolemy's Geographia. It appears to be related to the Brythonic word for 'washing', as suggested by George Boon of the National Museum of Wales. It refers to the hydraulic mining methods used on the site for extraction of the gold, and the washing tables used to concentrate the gold dust and nuggets. It is one of the best examples of the application of advanced Roman technology in Britain, and compares with other Roman mines in Europe such as those at Verespatak in Transylvania and Las Medulas in northern Spain. It is a site of international significance and importance.

All content from Kiddle encyclopedia articles (including the article images and facts) can be freely used under Attribution-ShareAlike license, unless stated otherwise. Cite this article:
Luentinum Facts for Kids. Kiddle Encyclopedia.