For 2006, Razia remained in South American Formula 3 and won the title. He also became a rookie driver for A1 Team Brazil in the 2006–07 A1 Grand Prix season.

In 2008, he remained in Euroseries 3000, partnering Frenchman Nicolas Prost, the son of four-time Formula One World Champion Alain Prost. In the Italian Formula 3000 standings he finished the season in fourth place. He won his first race win at Misano. 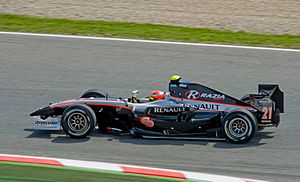 Razia driving at the Catalunya round of the 2009 GP2 Series season.

On October 2, 2008, it was announced that Razia will race for Team Arden in the 2008–09 GP2 Asia Series season. In the final race of the season in Bahrain, Razia claimed his first win.

He signed for Fisichella Motor Sport to compete in the main GP2 Series in 2009 season. At the Autodromo Nazionale Monza, Razia led from pole to take his first GP2 win.

Razia joined the Barwa Addax Team for the 2009–10 GP2 Asia Series season,. He was replaced before the second round, but returned for the final round in Bahrain.

He remained with Rapax for the 2010 season. He finishing eleventh in the drivers' championship. His team-mate, Pastor Maldonado, became the series champion. Razia helped Rapax to claim the teams' title.

As part of his Formula One testing deal with the Lotus team, Razia signed to drive for the new AirAsia team in 2011. He scored no points in the 2011 Asia series.

On December 15, 2009, it was officially announced that Razia would join the new Virgin Racing team as a test driver. In March 2011, Razia was confirmed as reserve and test driver for Team Lotus for the 2011 season. At the 2011 Chinese Grand Prix, Luiz Razia drove in Free Practice Session 1 for Team Lotus, replacing Jarno Trulli.

All content from Kiddle encyclopedia articles (including the article images and facts) can be freely used under Attribution-ShareAlike license, unless stated otherwise. Cite this article:
Luiz Razia Facts for Kids. Kiddle Encyclopedia.