Lukáš Hrádecký ( born 24 November 1989) is a Finnish footballer who plays as a goalkeeper for Bayer Leverkusen and the Finland national team. Born in Bratislava, present-day Slovakia, Hrádecký was raised in the Finnish city of Turku from the age of one. He began his senior club career playing for TPS, before signing with Esbjerg fB at age 19 in 2009. After winning his first trophy, the Danish 1st Division, during his third season in Denmark, he helped Esbjerg win the Danish Cup in 2013. Hrádecký was named Finnish Footballer of the Year by the Football Association of Finland three years in a row between 2016 and 2018.

Formerly an international at under-17, under-18, under-19, under-20 and under-21 level, Hrádecký made his debut for Finland in May 2010 at the age of 20. He has over 60 caps for his country. He appeared in nine out of ten of Finland's UEFA Euro 2020 qualification matches and helped the national team secure its first ever appearance at the UEFA European Championship.

Hrádecký began his career in Turun Palloseura, a club in Turku, where he grew up. In 2008, he played in the International Karel Stegeman U-19 Youth Tournament in Ruurlo, Netherlands, where he won the prize for best goalkeeper.

On 10 January 2009, Hrádecký transferred to Esbjerg fB and signed a four-year contract with the five-time Danish champions. On 3 August 2010 it was announced that Hrádecký had been called to be tested for a week by Manchester United to strengthen their goalkeeping department after the departure of Tom Heaton. However, he chose to seek the chance to be the primary keeper in Esbjerg instead. After the 2012–13 Superliga season Hradecky's contract with Esbjerg fB expired, and an agreement to prolong the contract was not reached.

On 12 June 2013, Hrádecký joined Danish Superliga club Brøndby IF on a four-year contract on a free transfer. On 21 June 2013 Hradecký made his debut in the Superliga in a match against Vestsjælland.

In August 2015 Hrádecký transferred from Brøndby to German Bundesliga team Eintracht Frankfurt. The value of the transfer was never published, but according to newspapers Eintracht paid €2.5 million to Brøndby. In 2017-18, Hrádecký's last season with Eintracht, Hrádecký was voted Bundesliga Goalkeeper of the Season.

In May 2018, Bayer Leverkusen announced the signing of Hrádecký for the 2018–19 season on a free transfer. He agreed a contract until 2023. 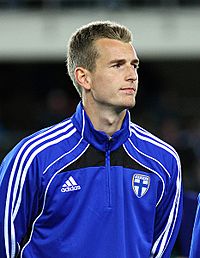 Hrádecký earned several caps for Finland on different junior levels. He made his junior level national team debut when he was 16 years old on 16 November 2006 in Athens in a match against Greece. He was a member of the Finland national under-20 football team and represented the team at the Valentin A. Granatkin Memorial Tournament. Hrádecký was selected to Finland national under-21 football team for 2009 UEFA European Under-21 Championship but he had to withdraw due to a knee injury. He was the first choice keeper for Finland's under-21 side during the 2011 UEFA European U21 Championship qualifications.

In January 2010 Hrádecký was called to the Finland national football team by Stuart Baxter to face South Korea in a friendly at Málaga, Spain. Hrádecký was at the bench the whole match. He finally made his first team debut on 21 May 2010, when he replaced Jukka Lehtovaara for the second half in a 2–0 away loss against Estonia. He played his first UEFA European Championship qualification game on 3 June 2011 when Mixu Paatelainen chose him to the starting line up against San Marino in Serravalle. During autumn of 2011 he established himself as a regular in the Finland national team and appeared in the UEFA European Championship qualification matches against Moldova, Netherlands and Sweden.

Hradecký appeared in three friendly matches during Finland´s preparation for 2014 FIFA World Cup qualification. He was chosen to starting line up in the first qualification match against France, but remained as a substitute for the rest of the campaign as Niki Mäenpää established himself as the number one choice.

Hrádecký was called up for the UEFA Euro 2020 pre-tournament friendly match against Sweden on 29 May 2021.

Hrádecký was born in the Kramáre [sk] area of Bratislava. He speaks Slovak and has a Slovak passport. In September 1990, his father, a volleyball player, started playing for Ruskon Pallo -67 [fi]. That winter, the family settled in Runosmäki, Turku. His brothers Tomas and Matej are also professional footballers.

All content from Kiddle encyclopedia articles (including the article images and facts) can be freely used under Attribution-ShareAlike license, unless stated otherwise. Cite this article:
Lukáš Hrádecký Facts for Kids. Kiddle Encyclopedia.