The Metabetchouan River (French: Métabetchouane) is a tributary of Lac Saint-Jean in the centre of the province of Quebec, Canada. The course of this river successively crosses the regional county municipalitys (MRC) of:

It ends at Desbiens, where a cave called Le trou de la Fée is located. Its source are the Mâles and Bouteille Lakes in the Laurentides Wildlife Reserve and it is 128 kilometres (80 mi) long.

The river has been dammed for hydroelectric power. Now, it is also a tourist river with rafting, canoeing, and fishing opportunities. It is known for its reserve of fresh-water salmon. In the region of Saguenay-Lac-Saint-Jean, this fish is known as Ouananiche.

This watercourse begins in the Laurentides Wildlife Reserve. The course of this river constitutes:

The Métabetchouane river valley is mainly accessible by:

The surface of the Métabetchoune River (except the rapids zones) is usually frozen from the end of November to the beginning of April, however the safe circulation on the ice is generally done from mid-December to the end of March.

With an average flow of 47m³/s, it takes its source in the Laurentides Wildlife Reserve. It has several falls, including the "chute à l'Épouvante" (Fall to the Horror) and the Martine Fall.

The main watersheds neighboring the Métabetchouane River are:

Intermediate course of the Métabetchouane river (downstream of the Rivière aux Canots) (segment of 19.2 km (11.9 mi))

At its mouth on the south shore of lac Saint-Jean, the Métabetchouane river forms a small lake, between the village of Chambord to the west and Desbiens to the east.

From the mouth of the Métabetchouane river on the south shore of lac Saint-Jean, the current crosses the latter on 22.8 km (14.2 mi) towards the northeast, then follows the course of the Saguenay River via La Petite Décharge on 172.3 km (107.1 mi) until Tadoussac where it merges with the Saint Lawrence estuary.

Its name is of Innu origin, but cognates exist in other Cree and Anishinabe dialects. From the roots matabi and djiwan (spelled matapetshuan in the modern Innu orthography), it can be translated as "river that empties into a lake". 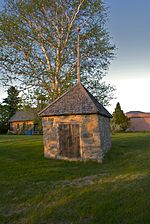 Powder magazine of the 18th century built along the Métabetchouane River

The mouth of the river may have been a seasonal Innu camp for thousands of years and the river itself was used as a route between Lake Saint-Jean and the Quebec City region. Important archaeological excavations on the banks of the river led, in the 1960s, to the discovery of a site frequented by the Amerindians since approximately 5000 years. In 1647, Jean de Quen was the first European to visit the place but his report did not make mention of the river. Some two decades later in 1676, the first reference was made of this river as Metabeki8an in the second register of Tadoussac. A French trading post was erected at its mouth in 1676. That same year, Jesuits established the Saint-Charles Mission at the river's mouth. In the mid 19th century, William Price began logging along the length of the river and it was used for a long time for log driving.

All content from Kiddle encyclopedia articles (including the article images and facts) can be freely used under Attribution-ShareAlike license, unless stated otherwise. Cite this article:
Métabetchouane River Facts for Kids. Kiddle Encyclopedia.