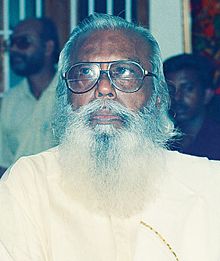 Madathil Vasudevan, popularly known as M. V. Devan (January 15, 1928 - April 29 ,2014) was an Indian painter, sculptor, writer, art critic and orator. He was made the Chairman of Kerala Lalithakala Akadem, an art institute, from 1974 to 1977. He was born in Panniyannur village in Thalassery in northern Kerala.

During this time, he created an organization called Perunthachan, which helped with the housing sector. Throughout his life, Devan tried to protect many paintings in India and parts of the world.

All content from Kiddle encyclopedia articles (including the article images and facts) can be freely used under Attribution-ShareAlike license, unless stated otherwise. Cite this article:
M. V. Devan Facts for Kids. Kiddle Encyclopedia.