The Ulster University Magee campus is one of the four campuses of Ulster University. It is located in Derry, County Londonderry, Northern Ireland and opened in 1865 as a Presbyterian Christian arts and theological college. Since 1953, it has had no religious affiliation and provides a broad range of undergraduate and postgraduate academic degree programmes in disciplines ranging from business, law, social work, creative arts & technologies, cinematic arts, design, computer science and computer games to psychology and nursing.

Within each faculty there are a number of schools offering programmes for their relative disciplines. The schools based on the Magee campus are:

Magee is home to the Arts & Humanities Research Institute (AHRI)

with membership drawn from former research groupings in the Humanities Research Institute, the Academy for Irish Cultural Heritages (AICH)

and the Institute of Ulster Scots Studies.

The AHRI provides an institutional focus for research activity and collaboration across four research clusters in Creative Arts and Technologies, Irish Language & Literature, English and History embracing a range of subject areas within the Faculty of Arts, including Creative Technologies, Music, Drama, Dance, Irish Language & Literature, English and History. The AHRI promotes a broad research culture and environment within which research activity in individual disciplines flourishes.

It also houses International Conflict Research (INCORE), a joint venture between the United Nations University and Ulster University. Established in 1993, it aims to address issues of the conflict in Northern Ireland and seek to promote conflict resolution internationally.

The principal academic post at the campus is the provost. Professor Thomas G Fraser was provost from 2002 to 2006, succeeded by Professor Jim Allen. In 2011, Professor Deirdre Heenan was appointed to the post in 2011, following the retirement of Professor Allen. She was replaced by Dr Malachy O'Neil in 2016

The Magee Campus gained its name from Martha Magee, the widow of a Presbyterian minister, who, in 1845, bequeathed £20,000 to the Presbyterian Church of Ireland to found a college for theology and the arts.

It opened in 1865 primarily as a theological college, but accepted students from all denominations to study a variety of subjects. It was a college of the Royal University of Ireland from 1880 and later became associated with the Trinity College, Dublin when the Royal University was dissolved in 1909 and replaced by the National University of Ireland. The Irish Roman Catholic bishops had in 1871 implemented a general ban on Catholics entering Trinity College, with few exceptions. This ban remained in place until it was rescinded by the Catholic Bishops of Ireland in 1970. By that time, Magee College had severed its links with TCD, as set out below.

During World War II, the college was taken over by The Admiralty for Royal Navy operational use, becoming with Ebrington Barracks (HMS Ferret), a major facility in the Battle of the Atlantic. A 2013 BBC report describes a secret major control bunker, later buried beneath the lawns of the college. From 1941 this bunker, part of Base One Europe, together with similar bunkers in Derby House, Liverpool, and Whitehall was used to control one million Allied personnel and fight the Nazi U-boat threat.

On 14 September 2013 Magee hosted, for the first time on the island of Ireland, the 23rd International Loebner Prize Contest in Artificial Intelligence based on The Turing Test proposed by the renowned British Computer Scientist, Alan Turing in 1950 who also worked on cracking the Enigma Machine code at Bletchley Park which was instrumental in the Battle of the Atlantic.

Julian Peck's (who resided at Prehen House in Derry) mother, Lady Winifred Peck (née Knox), was a sister of Dilly Knox who directed the code breaking at Bletchley Park. Sir Harry Hinsley OBE was Director of Studies at Cambridge University to Professor Robert Gavin, a former Provost of Magee.

Dame Alice Rosemary Murray, the first female Vice-Chancellor of Cambridge University, who also sat on the Lockwood Committee (1963–65) which recommended the closure of Magee as well as the location of Northern Ireland's 2nd University being Coleraine (February 1965), from which she was later awarded a Doctor of Science (DSc) Honorary Degree (1972), was stationed at Base One Europe as WRNS Chief Officer and responsible for the welfare of 5,600 Wrens stationed at Londonderry.

Also in 1953, Magee College broke its links with Dublin and became Magee University College. It was hoped by groups led by the University for Derry Committee that this university college would become Northern Ireland's second university after Queen's University of Belfast. However, in the 1960s, following the recommendations in the Lockwood Report by Sir John Lockwood, Master of Birkbeck College, London and former Vice-Chancellor of the University of London, the Stormont Parliament made a controversial decision to pass it over in favour of a new university in Coleraine. Instead it was incorporated into the two-campus New University of Ulster in 1969. The next fourteen years saw the college halve in size, while development focused on the main Coleraine campus.

In 1984, the New University merged with the Ulster Polytechnic, and Magee became the early focus of development of a new four-campus university, the University of Ulster. Student and faculty numbers recovered and grew rapidly over the next ten to fifteen years, accompanied by numerous construction projects. Magee grew from just 273 students in 1984 to over 4000 undergraduates in 2012. In 2012, the University continued to lobby the Northern Ireland Executive for an additional 1000 full-time undergraduate places, leading to 6000 students at Magee in 2017. In October 2014 the University of Ulster was rebranded as Ulster University. 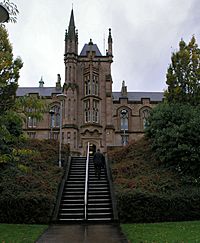 The main building was built with Scottish freestone, and opened in 1865.

The central feature of the campus is the original 1865 building. This is surrounded by Victorian red brick houses, and several modern buildings in red brick and glass, constructed since the formation of the University of Ulster.

The campus is used for education, but also as a convention centre. For example, Magee hosted the 2006 Tomo-Dachi convention.

Based at Magee, the Tip O'Neill Chair in Peace Studies was established in commemoration of the former Speaker of the United States House of Representatives Thomas "Tip" O'Neill Jr. a well-known supporter of the Northern Ireland Peace Process. The chair was inaugurated by the former President of the United States, Bill Clinton in 1995. Currently funded by The Ireland Funds the chair was held by the Nobel Peace Laureate, John Hume from 2002 to 2009. Under the tenure of Professor Hume Magee has hosted a series of guest lectures involving key national and international policy-makers.

All content from Kiddle encyclopedia articles (including the article images and facts) can be freely used under Attribution-ShareAlike license, unless stated otherwise. Cite this article:
Magee College Facts for Kids. Kiddle Encyclopedia.