Main Street has historically been the center of the city of Dallas. Many of Dallas' major retailers, hotels and banks once located here, and the district includes the city's early skyscrapers. Subsequent development of downtown moved north and east to the City Center District in following years, leaving many of the historic buildings inefficient for modern offices.

The Main Street District was the first district of downtown Dallas to experience extensive urban revival. Many of the grand historic buildings that had been neglected have been restored and adapted for new use. Pegasus Plaza, an urban plaza bounded by the Magnolia Hotel, Iron Cactus Restaurant, Adolphus Tower and the Kirby Building, is a gathering place for visitors and residents at the heart of the district. The narrow tree-lined street is a major pedestrian route through downtown. The district contains many sidewalk restaurants, basement night clubs and retail stores (most notably Neiman Marcus). While several of the buildings have found new life, there are many still awaiting restoration. Main Street Garden Park is a new focal park of the district's east end.

Commerce and Elm Streets, major east-west thoroughfares, form the boundaries of the district and also contain many additional landmark structures. 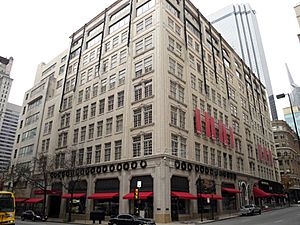 All content from Kiddle encyclopedia articles (including the article images and facts) can be freely used under Attribution-ShareAlike license, unless stated otherwise. Cite this article:
Main Street District, Dallas Facts for Kids. Kiddle Encyclopedia.