The Makushin Volcano (also known as Mount Makushin) is an ice-covered stratovolcano located on Unalaska Island in the Aleutian Islands of the U.S. state of Alaska. With an elevation of 2,036 meters (6,680 ft), (1,800 m) its summit is the highest point on the island. Makushin is one of the most active among the 52 historically active volcanoes of Alaska. It has erupted at least two dozen times over the past several thousand years, with the last eruption occurring in 1995. 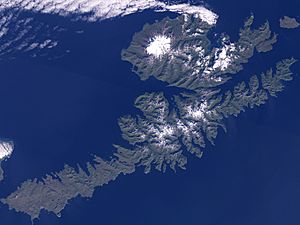 NASA satellite view of Unalaska Island. Makushin is the prominent white snowy area to the northwest

In 1792, Sarichev called the volcano "Ognedyshushchaya Gora" meaning "fire-breathing mountain", i.e. volcano in Russian. In 1825, it was known as Makuschkin Volcano, possibly from the Russian word makushka, meaning "the top (of the head)". Its native name was Aigagin, a derivative of the word Aigak in the native tongue of the Aleuts. Makushin was also the native village here on the northern shore of the Makushin Bay where the foreman or bidarshik of the Russian American Company lived. There were six huts (yourts) where 35 natives lived.

The history of the volcano has been identified with the early Pliocene age. However, the caldera of the volcano is dated to a comparatively recent history of 8000 years. The “Sugarloaf cone on the ENE flank, and a cluster of about a dozen explosion pits and cinder cones at Point Kadin on the WNW flank” is attributed to the Holocene age.

According to the history recorded by the Alaska Volcano Observatory: “The first episode began in Pliocene or early Pleistocene time (the oldest known age of lavas is 0.93 Ma [Nye, 1990]) and produced extensive flows and subordinate pyroclastic deposits of basaltic and andesitic composition, which enlarged the island by several kilometers along the northwest coast. Radial dips of flows suggest that Makushin Volcano itself was the principal vent area. The older flows are extensively glaciated, which implies a minimum age of late Pleistocene. The summit of Makushin subsequently collapsed, forming a summit caldera. Andesitic pyroclastic-flow and debris flow deposits occur in glaciated valleys on the north and south sides of the volcano indicating a Holocene age for the caldera-forming eruption." 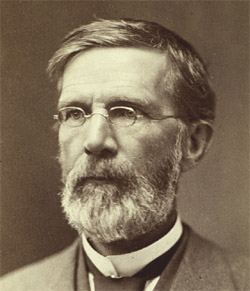 English born American geographer George Davidson in 1867 who conducted some important geographical and geological research into the volcano and the Makushin valley.

Although the volcano has not erupted since 1995, studies conducted between July 1996 and August 2000 recorded some 176 minor earthquakes registering between 0.1 and 3.2 on the Richter Scale, occurring on average 2 to 3 times a month. The hypocenters of the earthquakes generally occur in two cluster areas, the first is the larger and more active, located about 6 kilometers (3.7 mi) southeast of the summit of the volcano at depths ranging from 2–9 kilometers (1.2–5.6 mi) and the second, about 24 kilometers (15 mi) east of the summit under Unalaska Bay occurs at depths of 6–14 kilometers (3.7–8.7 mi).

The volcano was climbed by English born American geographer George Davidson in 1867 who conducted some important geographical and geological research into the volcano area and the Makushin valley. 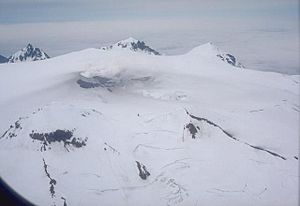 Mount Makushin is located on the northern Unalaska Island, which is situated to the west of the town of Dutch Harbor. The Unalaska Bay, which is 10 kilometers (6.2 mi) wide, separates the Dutch Harbor and Unalaska towns. The volcano is truncated, with a width of 16 kilometers (9.9 mi), forming the triangular northwest extension of the Unalaska Island. The caldera, which crowns the volcano, has a width of 2.5 kilometers (1.6 mi) (3 kilometers (1.9 mi) is also mentioned in another reference). Compared with the other Aleutian strato-volcanoes in the region, which have steep profiles, the Makushin volcano is a contrast that exhibits a broad and dome like structure with an ice field coverage of 40 km2 (15 sq mi). Fumaroles and hot springs in area form a roughly linear trend. About 8 kilometers (5.0 mi) to the south of this volcano is the “composite Pakushin cone” that has multiple craters, which is 4000 years old eruption; pyroclastic flows and surges have been reported here. The southeast flank of the volcano has rock exposures, at 975 meters (3,199 ft) elevation.

The pyroclastic flows deposited by the eruptions forming the Caldera have engulfed valleys in the eastern, northeastern, northern, and western valleys of the valley with depths up to 100 m. The northeast border of the volcano is also filled with volcanic lava, which is called the “Lava Ramp” spreading to an area of 50 km2 (19 sq mi). A subsidiary cone formed is the Pakushin Cone), on the south. In the east and southeast part of the volcano hot springs and fumaroles have been created, at the summit and in valleys. A valley of the same name stretches to the northeast of the volcano from Broad Bay in Captain's Bay and was identified as a glacial valley after a survey in 1873. 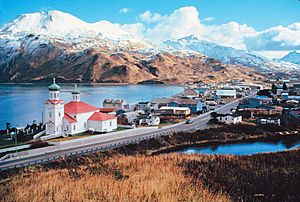 The closest town to the Volcano is the Unalaska town which is located 1,280 kilometers (800 mi) from Anchorage on the Aleutian Archipelago at the northern end of the Island. It is situated on a well protected bay. This was at the cross roads of shipping and trade during Russian occupation (1741–1867). Dutch Harbor another important harbor town across the Unalaska town was a major naval base during the World War II. Fishing and crabbing industries have been the mainstay of the economy of Unalaska island.

The high-temperature geothermal resources study of volcanoes in Alaska has covered the geothermal areas in the summit caldera peak and also on the southeastern and eastern flanks of the Makushin. It is recorded as a subduction-related volcanic arc in the middle of the great Aleutian chain.

Energy resources from the geothermal reservoir beneath the volcano have been assessed in a study carried out by the Alaska Power Authority to meet the power demands of the town of Unalaska and the Dutch Harbor. The study has established that such an energy generation from the geothermal resources would be cheaper than the diesel power system existing on the island.

All content from Kiddle encyclopedia articles (including the article images and facts) can be freely used under Attribution-ShareAlike license, unless stated otherwise. Cite this article:
Makushin Volcano Facts for Kids. Kiddle Encyclopedia.