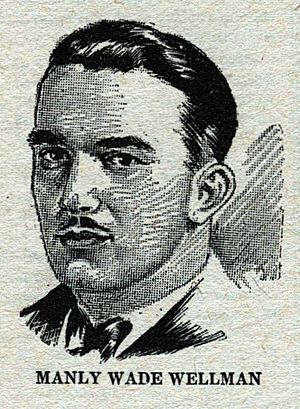 Manly Wade Wellman, as depicted in Wonder Stories in 1931

Manly Wade Wellman (May 21, 1903 – April 5, 1986) was an American writer. While his science fiction and fantasy stories appeared in such pulps as Astounding Stories, Startling Stories, Unknown and Strange Stories, Wellman is best remembered as one of the most popular contributors to the legendary Weird Tales, and for his fantasy and horror stories set in the Appalachian Mountains, which draw on the native folklore of that region. Karl Edward Wagner referred to him as "the dean of fantasy writers." Wellman also wrote in a wide variety of other genres, including historical fiction, detective fiction, western fiction, juvenile fiction, and non-fiction.

Wellman was a long-time resident of North Carolina. He received many awards, including the World Fantasy Award and Edgar Allan Poe Award. In 2013, the North Carolina Speculative Fiction Foundation inaugurated an award named after him to honor other North Carolina authors of science fiction and fantasy.

Three of Wellman's most famous recurring protagonists are (1) John, a.k.a. John the Balladeer, a.k.a. "Silver John", a wandering backwoods minstrel with a silver-stringed guitar, (2) the elderly "occult detective" Judge Pursuivant, and (3) John Thunstone, also an occult investigator.

All content from Kiddle encyclopedia articles (including the article images and facts) can be freely used under Attribution-ShareAlike license, unless stated otherwise. Cite this article:
Manly Wade Wellman Facts for Kids. Kiddle Encyclopedia.