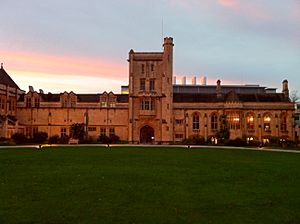 Mansfield College is one of the colleges of the University of Oxford. It was founded in 1838 as Spring Hill College in Birmingham. Spring Hill College moved to Oxford in 1886. At that time it was renamed Mansfield College, in honor of its largest donors, George and Elizabeth Mansfield. The college's main building was designed by Basil Champneys, and was completed in 1889.

All content from Kiddle encyclopedia articles (including the article images and facts) can be freely used under Attribution-ShareAlike license, unless stated otherwise. Cite this article:
Mansfield College, Oxford Facts for Kids. Kiddle Encyclopedia.