Maplesville is a town in Chilton County, Alabama, United States. At the 2010 census the population was 708.

The mayor of Maplesville is W. C. Hayes, Jr. 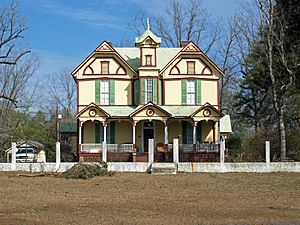 The Walker-Klinner Farm in Maplesville

The town of Maplesville first began to grow in a location 3 miles (5 km) east of its present location, near Mulberry Creek. European settlers migrated to the area from Georgia and the Carolinas following the Battle of Horseshoe Bend in 1814, after the Native Americans who had been living there were defeated. The town was named after Stephen W. Maples, a merchant and the town's first postmaster.

The town was located at the crossroads of two important trading routes: the Elyton Road from Selma to Birmingham, and the Fort Jackson Road from Tuscaloosa to Montgomery. By 1850, the original town of Maplesville had a population of 809. The town had two horse-racing tracks, which brought visitors to the town, and had several inns and taverns to accommodate the stagecoach traffic.

The original town site began to decline in the early 1850s, after two railway lines were completed 3 miles west of the town. The Selma, Rome, and Dalton Railroad completed their line in 1850, and the Alabama & Tennessee River Railway followed in 1853. That same year, a depot was constructed at that location. Residents and businesspeople from the original Maplesville began moving closer to the railroad, and when the Maplesville Post Office was relocated to the railroad town in 1856, the new town was renamed Maplesville. The original town site gradually became deserted, and all that remains today is the Old Maplesville Cemetery along Route 191.

Because of Maplesville's abundant rail access, it became a shipping point for cotton and other goods from the surrounding area. In 1865, the train depot was destroyed in a raid by Union general James H. Wilson, as Wilson's Raiders marched on to Selma. It was replaced soon after the Civil War, but was destroyed by fire in 1911.

Maplesville continued to prosper after the Mobile and Ohio Railroad ran a line through the town in 1897, and many of the historic buildings in the town today were built during that period. In 1901, a lumber mill opened near the town, and the town's population grew as people moved to Maplesville to work at the mill. Maplesville incorporated in 1914, but the incorporation soon lapsed because the town failed to hold elections after the initial round. It reincorporated in 1947, and by 1951 had established a telephone system, garbage pick-up, and water system.

There are four historic sites currently recognized in Maplesville. The Walker-Klinner Farm is listed on the National Register of Historic Places, and the following three locations are listed on the Alabama Register of Landmarks and Heritage:

There were 268 households out of which 32.8% had children under the age of 18 living with them, 52.2% were married couples living together, 11.9% had a female householder with no husband present, and 31.7% were non-families. 30.2% of all households were made up of individuals and 12.7% had someone living alone who was 65 years of age or older. The average household size was 2.51 and the average family size was 3.13.

Things to see and do in Maplesville

All content from Kiddle encyclopedia articles (including the article images and facts) can be freely used under Attribution-ShareAlike license, unless stated otherwise. Cite this article:
Maplesville, Alabama Facts for Kids. Kiddle Encyclopedia.