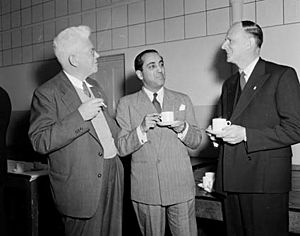 During a two-day symposium on "Atomic Power in Australia" at the New South Wales University of Technology, Sydney, which began on 31 August 1954, Oliphant (left), Homi Jehangir Bhabha (centre) and Philip Baxter (right) meet over a cup of tea

Sir Marcus “Mark” Laurence Elwin Oliphant, commonly known as Marcus Oliphant, was an Australian physicist and humanitarian. He helped to develop nuclear weapons. He was involved with the first experimental demonstration of nuclear fusion.

Oliphant was born on October 8, 1901 in Kent Town, Adelaide, Australia. His father, Harold George “Baron” Oliphant, was a civil servant. His mother, Beatrice Edith Fanny Oliphant, was an artist.

After graduating from Adelaide High School in 1918, he was unable to get money to pay for university. He got a job cleaning floors at a jewellery store. He was soon able to study at the University of Adelaide. He was interested in medicine, but Kerr Grant, the physics professor, offered him a place in the Physics Department. He received his Bachelor of Science degree in 1921. Oliphant attempted to build a 60-inch (150-centimetre) cyclotron at the University of Birmingham. The completion of it was postponed by the World War II in Europe in 1939.

He was involved with the development of radar with John Randall and Harry Boot. They created a completely new design, the cavity magnetron, which made microwave radar possible.

He is known for the co-discovery of deuterium, tritium, helium-3 and nuclear fusion and for the development of microwave radar.

He achieved many awards over the course of his life.

All content from Kiddle encyclopedia articles (including the article images and facts) can be freely used under Attribution-ShareAlike license, unless stated otherwise. Cite this article:
Marcus Oliphant Facts for Kids. Kiddle Encyclopedia.