Mark Thomas Streit (born 11 December 1977) is a Swiss former professional ice hockey defenceman. He was formerly the captain of both the New York Islanders and the Swiss national team. Streit was one of the few swingmen in the NHL who could play both as a defenceman and as a forward. He will be inducted into the IIHF Hall of Fame in 2020.

He was featured on the front cover of the Swiss versions of the NHL series of hockey games, from NHL 08 to NHL 11. 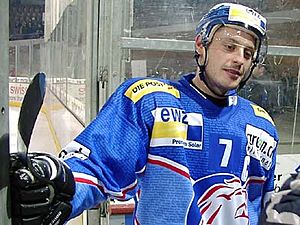 Streit while with the ZSC Lions in 2006.

Streit began his career in the Swiss Nationalliga A with Fribourg-Gottéron in 1995–96 as an 18-year-old. The following year, he transferred to Davos and improved to a 25-point campaign in 44 games in 1998–99, his third season with the team.

Garnering attention from the National Hockey League (NHL), but being undrafted at the time, he bounced around the minor leagues in the 1999–2000 season, playing the majority of the season with the Springfield Falcons of the American Hockey League (AHL).

Streit returned to the Nationalliga and spent five seasons with the ZSC Lions after his brief North American stint. He helped the ZSC Lions to a Swiss championship in 2001, as well as back-to-back IIHF Continental Cups in 2001 and 2002. After a 12-goal, 36-point season in 48 games in 2003–04, Streit was drafted in the 2004 NHL Entry Draft, 262nd overall, by the Montreal Canadiens at 26 years old (players are typically drafted at the age of 18).

As the 2004–05 NHL season was cancelled due to a lockout, Streit remained with the Lions for one more season and posted a career high 14 goals, 29 assists and 43 points in 44 games.

In the 2005–06 season, Streit made his NHL debut with the Canadiens, appearing in 48 games and recording 11 points. On 16 March 2006, in a game against the Carolina Hurricanes, Streit was joined by two other Swiss players playing in the NHL at the time, the Canadiens' goaltender David Aebischer and the Hurricanes' goaltender Martin Gerber.

Streit continued to make strides the following season, improving to 36 points in 76 games before emerging as an elite NHL defenceman in his third season with the Canadiens. In the 2007–08 season, he finished third in league scoring among defencemen, behind Nicklas Lidström and Sergei Gonchar, with 62 points in 81 games. Streit was made the Canadiens' nomination for the Bill Masterton Trophy, awarded for perseverance and dedication to hockey. 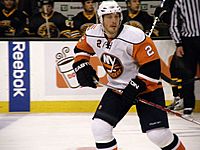 Coming off a breakout campaign, Streit became an unrestricted free agent on 1 July 2008, and signed a five-year, $20.5 million contract with the New York Islanders. Upon signing with the Islanders, Streit became the second-highest paid Swiss professional athlete to Roger Federer, earning more than top national soccer players. During his first season with the Islanders, Streit was selected to appear in his first NHL All-Star Game in 2009. In his first season with the team, Streit led the Islanders in scoring with 56 points, becoming only the second defenseman to lead his team in scoring since the NHL lockout. The first was Ľubomír Višňovský, who led the Los Angeles Kings with 67 points in 2005–06.

On 25 September 2010, Streit tore his shoulder labrum and rotator cuff after a routine check into the boards by teammate Matt Moulson during a scrimmage. He was sidelined for the entire 2010–11 season.

Streit became the first Swiss-born team captain in NHL history, when the Islanders appointed him to the position in September 2011.

During the 2012–13 lockout, Streit played for SC Bern of the Swiss National League A.

Streit, who became an unrestricted free agent entering the summer of 2013, had his rights traded from the Islanders to the Philadelphia Flyers on 12 June 2013, for Shane Harper and a fourth-round draft pick in the 2014 NHL Entry Draft. On 28 June, Streit signed a four-year, $21 million deal with the Flyers.

On 11 June 2017, Streit and the Pittsburgh Penguins won the Stanley Cup after defeating the Nashville Predators.

Return to Montreal and retirement

On 25 July 2017, Streit signed as a free agent to a one-year, $700,000 deal in a return to the Montreal Canadiens. On 12 October 2017, the Canadiens placed Streit on waivers just 4 games into the season. He cleared waivers, but refused to report to the Canadiens' AHL affiliate, the Laval Rocket. Consequently, Streit was placed on unconditional waivers on October 15 effectively ending his NHL career. He and the Canadiens came to a mutual agreement to terminate his contract the next day.

On 30 October 2017, Streit announced his retirement from professional hockey after 12 NHL seasons. 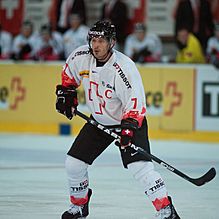 Streit with the Swiss national team in 2012.

In 1998, Streit appeared in his first of ten consecutive World Championships. Playing as the host nation, Switzerland finished a surprising fourth, falling to the Czech Republic in the bronze-medal game. He scored an international career-best seven points in seven games in 2005, as Switzerland advanced to the quarter-finals, losing to Sweden 2–1.

As Streit was named team captain at the 2006 Winter Olympics in Turin, Switzerland improved to sixth, topping international giants Czech Republic and Canada in their preliminary games. Streit scored the game-winning goal against the Czechs to defeat them 3–2 in the Swiss' second round-robin game, then assisted on the second goal of a 2–0 upset against Canada two days later. Following the stunning Swiss victory over Canada, an incredulous Streit admitted, "I never thought we could do that." In the quarter-finals, Streit scored in the first period to tie the game 1–1, but the Swiss were overpowered by Sweden 6–2.

He will be inducted into the IIHF Hall of Fame in 2020.

In 2020 he was introduced in to the IIHF All-Time Switzerland Team.

All content from Kiddle encyclopedia articles (including the article images and facts) can be freely used under Attribution-ShareAlike license, unless stated otherwise. Cite this article:
Mark Streit Facts for Kids. Kiddle Encyclopedia.