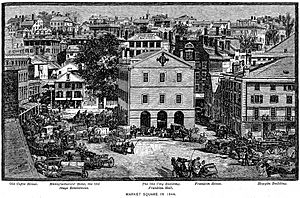 Market Square is a market square in Providence, Rhode Island. It is located at the intersection of present-day North Main Street and College Street. Market Square has been a longtime focal point in Providence for news, shopping, and gossip.

In June 1843, President John Tyler toured New England while considering a potential third-party bid for re-election. One of Tyler's several Providence stops was at Market Square. The president enjoyed a meal at the Franklin House, an inn across from the Market House.

During the Civil War, Market Square was the site of several public "war meetings" presided by mayor Jabez C. Knight. During these meetings, public officials and dignitaries made public announcements and attempted to build up enlistment and support for the Union side during the war.

One such meeting was held in August 1862 to announce the Militia Act of 1862, which gave the state authority to draft. The act also allowed African-Americans to participate in the war as soldiers and war laborers. The announcement was received with "loud cheers." Governor William Sprague IV called for "colored citizens" to form a regiment, and promised to personally accompany this regiment into battle. In July 1863, after the Enrollment Act established a national draft, a blindfolded official selected names of conscripted men from a wheel in Market Square.

In 1882 the first electric arc lights in Providence were installed by the Rhode Island Electric Lighting Company on Market Square and Westminster Street.

On September 7 (or September 8), 1897, the anarchist and feminist Emma Goldman was arrested for "unlawful open air speaking" and "attracting a crowd" when she attempted to speak in at Market Square, during a four-month lecture tour. The mayor of Providence had warned Goldman that she would be arrested if she spoke in Providence. She had been traveling to lecture on topics such as "Why I am an Anarchist-Communist," "Woman", "Marriage", the recent assassination of the Spanish Premier, and a speech "Berkman's Unjust Sentence," about Alexander Berkman's imprisonment for the murder of Henry Clay Frick. After jailing Goldman overnight, the Providence authorities ordered her to leave town within 24 hours, or else face three months imprisonment.

All content from Kiddle encyclopedia articles (including the article images and facts) can be freely used under Attribution-ShareAlike license, unless stated otherwise. Cite this article:
Market Square, Providence, Rhode Island Facts for Kids. Kiddle Encyclopedia.