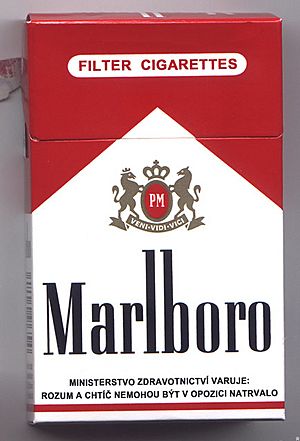 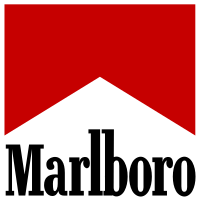 Marlboro is the largest selling brand of cigarettes in the world. It is made by Philip Morris USA (a branch of Altria) within the US, and by Philip Morris International (now separate from Altria) outside the US. It is famous for its billboard advertisements and magazine ads of the Marlboro Man. 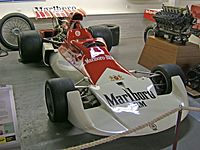 Marlboro's motorsport sponsorship started with the BRM Formula One team in 1972. 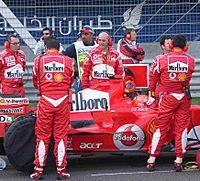 Prominent Marlboro branding on Ferrari Formula One car and team at the 2006 Bahrain Grand Prix.

In September 2005, Ferrari signed an extension of their sponsorship arrangement with Marlboro until 2011. This came at a time when tobacco sponsorship was being banned in many location. It had become illegal in the European Union, including F1 races. Other major teams have withdrawn from relationships with tobacco companies. In April 2008, the Marlboro logo was displayed on the Ferrari for the last time.

Marlboro then replaced the logo with a variety of barcodes. Leading health officials called for a review of the barcode advertising. The Ferrari team claims the barcode is part of the car design, not an advertising message. The controversial barcode designed was recently removed by Ferrari for the start of the 2010 Spanish Grand Prix.

Marlboro also sponsored the Alfa Romeo Formula One team between 1980 and 1983.

Since their start in Formula One, Marlboro has also sponsored numerous teams and races.

Penske driven by Emerson Fittipaldi in 1993.

Marlboro sponsorship in Champ Car (also known as 'CART' and 'IndyCar' at that time) dates back to 1986. The Penske cars in the Indy Racing League (IRL) currently run in Marlboro's distinctive red and white colors. In 2006, a Marlboro-sponsored car won the Indianapolis 500. For the 2007 season, Marlboro had ended their sponsorship of the Penske Cars. The Penske team will retain the color scheme. Where 'Marlboro Penske' appeared on the side of the cars, 'Team Penske' replaced it. Although Marlboro does not sponsor Team Penske, Philip Morris USA is still Team Penske's main sponsor.

Marlboro also sponsored the Australian Marlboro Holden Dealer Team from 1974 through to 1984. The Marlboro branding gave rise to some of Australia's most prominently recognizable race cars such as the L34 and A9X Torana, as well as the VK Group C "Big Banger" Commodore.

In Motorcycling Grand Prix, Marlboro sponsored the Yamaha team in 500cc and 250cc class. Marlboro currently sponsors the Ducati MotoGP. As of the 2009 Grand Prix motorcycle racing season, they are only allowed to put the Marlboro brand the bikes in Qatar.

Marlboro also has a long history in rallying sponsorship, including with the factory World Rally Championship teams of Toyota, Mitsubishi, and Peugeot. During the 2007 GP2 Series Season, ART Grand Prix was also sponsored by Marlboro.

Marlboro are generally credited as being among the most important of sponsors to the world of Formula 1 (and motor racing in general) in terms of the amount of financial backing given to various competitors. In mid-2006, special "racing editions" of Marlboro Red were sold in the UK, with a Ferrari-inspired design, although the Ferrari name and badge were not used.

All content from Kiddle encyclopedia articles (including the article images and facts) can be freely used under Attribution-ShareAlike license, unless stated otherwise. Cite this article:
Marlboro (cigarette) Facts for Kids. Kiddle Encyclopedia.