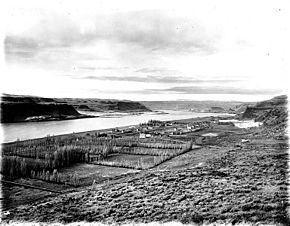 Maryhill from the Stonehenge replica location, but in 1913

Maryhill is a census-designated place (CDP) in Klickitat County, Washington, United States. The population was 98 at the 2000 census.

Maryhill is named after the wife and daughter of regional icon Sam Hill, who purchased land and envisioned a community there shortly after the turn of the 20th century. Earlier the area was known as "Columbia" or "Columbus".

Hill used his Maryhill property to build the first paved roads in the Pacific Northwest, the Maryhill Museum of Art (originally intended as a grand residence for the Hills), Maryhill Stonehenge, a monument to the World War I dead of Klickitat County in the form of a Stonehenge replica, and a planned community. Born a Quaker, Hill hoped to attract a Quaker community to eastern Washington. His plans never materialized, and the town buildings he constructed burned down several years later.

Hill intended the Stonehenge replica to express that modern warfare (like Druid sacrifices as he understood them) was a form of needless human sacrifice.

According to the United States Census Bureau, the CDP has a total area of 2.8 square miles (7.3 km²), all land.

There were 40 households out of which 30.0% had children under the age of 18 living with them, 57.5% were married couples living together, 5.0% had a female householder with no husband present, and 35.0% were non-families. 22.5% of all households were made up of individuals and 10.0% had someone living alone who was 65 years of age or older. The average household size was 2.45 and the average family size was 2.92. 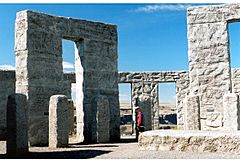 All content from Kiddle encyclopedia articles (including the article images and facts) can be freely used under Attribution-ShareAlike license, unless stated otherwise. Cite this article:
Maryhill, Washington Facts for Kids. Kiddle Encyclopedia.