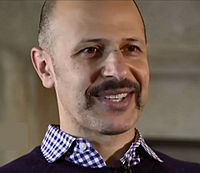 Maziyar Jobrani (Persian: مازیار جبرانی; born February 26, 1972) is an Iranian-American comedian and actor. He was born in Tehran. He is known for being part of the "Axis of Evil" comedy group.

His best known movies are The Interpreter, Friday After Next, Dragonfly, and Jimmy Vestvood: Amerikan Hero. He appeared as a regular character on the 2017 CBS sitcom Superior Donuts.

All content from Kiddle encyclopedia articles (including the article images and facts) can be freely used under Attribution-ShareAlike license, unless stated otherwise. Cite this article:
Maz Jobrani Facts for Kids. Kiddle Encyclopedia.