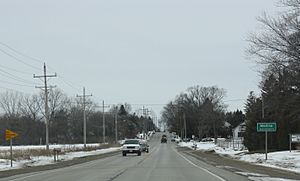 Looking west at the sign for Medina on WIS 96.

Medina, originally Young's Corner, is an unincorporated community in the Town of Dale in southwest Outagamie County, Wisconsin, United States. It is located 3.5 miles south of Hortonville, 11 miles west of Appleton, and 20 miles northwest of Oshkosh.

The first settlers in Medina were Zebediah Hyde, Lewis Hyde, and Alva McCrary, and Samuel Young and sons, who arrived in 1848.

The town was originally named Young's Corner after one of Samuel Young's sons, William Young. The name was changed to Medina prior to 1851.

A post office called Medina was established in 1852, and remained in operation until it was discontinued in 1966. The community was named after Medina, Ohio.

All content from Kiddle encyclopedia articles (including the article images and facts) can be freely used under Attribution-ShareAlike license, unless stated otherwise. Cite this article:
Medina, Outagamie County, Wisconsin Facts for Kids. Kiddle Encyclopedia.