Merewether is a suburb of Newcastle, New South Wales, Australia, located 3 km (2 mi) from Newcastle's central business district with a population of around 11,000. The suburb stretches 3 km (2 mi) from Merewether Beach in the east to Adamstown in the west.

Merewether was originally part of the Burwood Estate, and takes its name from the owner, Edward Christopher Merewether. The Church of England parish church is St.Augustine, in Llewellyn Street, the land and cost of erection met by Mr. Edward Merewether. It became the centre of a new Provisional District in the Diocese of Newcastle in 1890. In 1891 the Census gave the population as 4,700. Merewether was incorporated as a Municipality in 1885, covering 1,110 acres (4.5 km2) and 31 km (19 mi) of streets. The Mayor in 1901 was David Lloyd, a funeral director who resided in Railway Street. The former Council Chambers, opposite the Post Office, are today the clubhouse of the Australian Returned Services League. In 1938 an Act of the New South Wales Parliament created a "City of Greater Newcastle", incorporating 11 municipalities into one local government area, including Merewether. 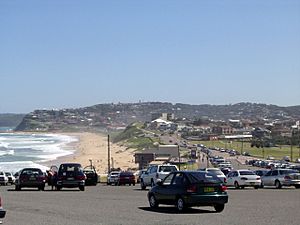 Professional Surfer Mark Richards is a resident of Merewether. 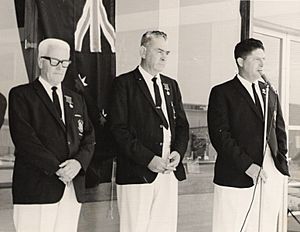 Merewether, once served by electric tramways to the city, and today by buses, has excellent road connections to all sections of Newcastle and the major highways which serve it. Merewether's oldest mansion is Hillcrest, originally the residence of the Merewether family. Above it is the Scenic Drive with many expensive 'modern' homes, which date from the late 1950s upwards, with spectacular views. 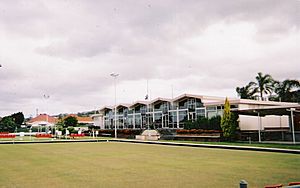 Following 18 months construction, Merewether Bowling Club, with one green, was opened on 6 February 1954 upon a long-closed old colliery west of the railway line, in Caldwell Street. Following the closure of the railway in 1960 the land it occupied next to the club was purchased and another green established, and on Sunday 12 February 1967, Club President Wallace Frost opened the "magnificent" and extensive new Club House which had cost $100,000 dollars.

At Merewether is the Lingard Private Hospital, in the lower part of Merewether Street. 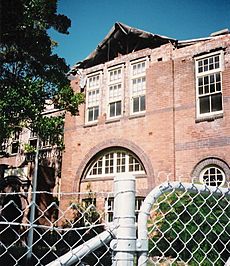 The Junction School, 1960, before most of it was destroyed in the Dec 1989 earthquake. Left is the Infants School, centre the Girls' School, and right, the Boys' School.

There are three primary schools in the suburb - Merewether Public [State] School in Henry Street at the Glebe, the Catholic Holy Family Primary School in Janet Street, and Hamilton South Public School which is actually located within the Merewether postcode area on Kenrick Street. Two more, Merewether Heights Public School on Scenic Drive and The Junction Public School (founded in 1860) are located in Merewether Heights and The Junction respectively, on the borders that those suburbs share with Merewether. (The Junction only became a gazetted separate suburb in 1991). Pupils from the schools feed into the secondary schools of Newcastle High School, Kotara High School, the Catholic St Pius X college at Adamstown or the Anglican-affiliated Newcastle Grammar School. Merewether High School, an academic selective public school, is actually located 600 m (1,969 ft) from Merewether in the suburb of Broadmeadow.

All content from Kiddle encyclopedia articles (including the article images and facts) can be freely used under Attribution-ShareAlike license, unless stated otherwise. Cite this article:
Merewether, New South Wales Facts for Kids. Kiddle Encyclopedia.