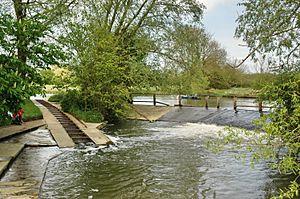 The punt rollers and weir at Mesopotamia. 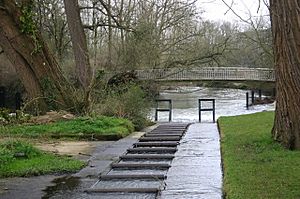 Looking down the rollers with Mesopotamia in the background.

Mesopotamia is a narrow island (about 800 yards long by 30 yards wide) that forms part of the University Parks, Oxford, England. It lies between the upper and lower levels of the River Cherwell. The name Mesopotamia in Greek means "between the rivers" and originally referred to the area between the Tigris and Euphrates rivers in present-day Iraq.

The land was purchased by the University of Oxford during the expansion of the Oxford University Parks between 1860 and 1865. A footpath, Mesopotamia Walk, laid out in 1865 runs along the centre of the spur to Kings Mill.

The Domesday Book records a watermill on this site and milling continued until 1825; one level of the river was once the mill stream. From 1914, attempts were made to introduce wild ducks and geese to the area, but these proved fruitless because of the predatory local otter population. Until 1926, a ferry operated from a point halfway along the Walk, when it was replaced by a footbridge.

All content from Kiddle encyclopedia articles (including the article images and facts) can be freely used under Attribution-ShareAlike license, unless stated otherwise. Cite this article:
Mesopotamia, Oxford Facts for Kids. Kiddle Encyclopedia.