Messier 80 (also known as M80 or NGC 6093) is a globular cluster in the constellation Scorpius. It was discovered by Charles Messier in 1781.

The star cluster is located midway between α Scorpii (Antares) and β Scorpii in a field in the Milky Way that is rich in nebulae. It can be viewed with modest amateur telescopes as a mottled ball of light. With an apparent diameter of about 10' and at an estimated distance of 32,600 light-years, M80's spatial diameter is about 95 light-years. It contains several hundred thousand stars, and is among the more densely populated globular clusters in the Milky Way.

It contains a relatively large number of blue stragglers, stars that appear to be much younger than the cluster itself. It is thought these stars have lost part of their outer layers due to close encounters with other cluster members or perhaps the result of collisions between stars in the dense cluster. Images from the Hubble Space Telescope have shown districts of very high blue straggler densities, suggesting that the center of the cluster is likely to have a very high capture and collision rate.

On May 21, 1860, a nova was discovered in M80 that attained a magnitude of +7.0. The nova, variable star designation T Scorpii, reached an absolute magnitude of −8.5, briefly outshining the entire cluster. 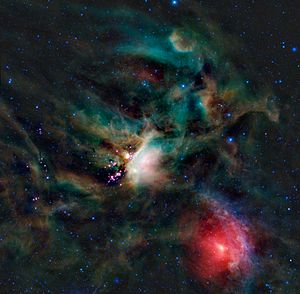 M80 is on the far right edge of this image of Rho Ophiuchi cloud complex towards the top.

All content from Kiddle encyclopedia articles (including the article images and facts) can be freely used under Attribution-ShareAlike license, unless stated otherwise. Cite this article:
Messier 80 Facts for Kids. Kiddle Encyclopedia.