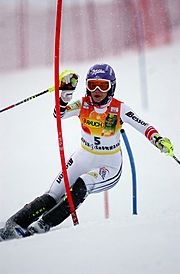 Kirchgasser at Aspen
in November 2006

Michaela Kirchgasser (born 18 March 1985) is a retired Austrian alpine ski racer. She raced in the technical events of slalom and giant slalom, and also the combined.

On 25 November 2006, Kirchgasser made her first World Cup podium with a third place in the giant slalom at Aspen, Colorado. Her first victory was on 24 February 2007, in a giant slalom at Sierra Nevada, Spain.

She retired from competition in 2018, with her final World Cup start being in a slalom in Ofterschwang, which she raced whilst wearing a bright pink dress.

Michaela Kirchgasser married Sebastian Kirchgasser on 7 May 2016 - despite having the same last name they are not related.

All content from Kiddle encyclopedia articles (including the article images and facts) can be freely used under Attribution-ShareAlike license, unless stated otherwise. Cite this article:
Michaela Kirchgasser Facts for Kids. Kiddle Encyclopedia.