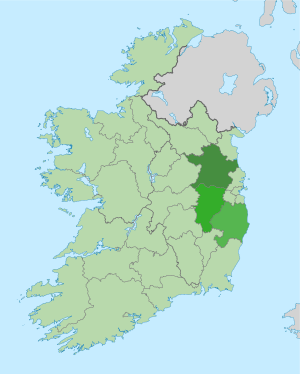 The Mid-East Region of Ireland with each constituent county highlighted.

The Mid-East Region (coded IE022) is a NUTS Level III statistical region of Ireland. It consists of the territory of the counties of Kildare, Meath and Wicklow. The Mid-East Region spans 6,063 km2, 8.7% of the total area of the state (roughly 7% of the Island) and according to the 2006 census had a population of 475,360.

The Mid-East has experienced continuous population growth since 1961. This growth is primarily influenced by the regions close proximity to the Dublin Region. The region has large urban areas and contains almost 20 towns with a population of over 5,000. But the region mostly has a rural landscape and the total area of viable agricultural land in the Mid-East is 69%. The manufacturing industry employs a significant number of people in the region and it is the location of high tech industries in areas such as Leixlip and Bray.

The region contains notable tourist attractions such as Trim Castle, Kildare Cathedral, Brú na Bóinne and Glendalough. Prominent geographical features include the River Liffey, the Wicklow Mountains and the Curragh of Kildare which is a major centre of stud farming.

A list of the ten largest settlements in the mid-east. County capitals are included and are shown in bold.

All content from Kiddle encyclopedia articles (including the article images and facts) can be freely used under Attribution-ShareAlike license, unless stated otherwise. Cite this article:
Mid-East Region, Ireland Facts for Kids. Kiddle Encyclopedia.