The selection of Monterey as the county seat of Highland County in 1847 was associated with the blazing of the Staunton and Parkersburg Turnpike in 1838. The new town was named in commemoration of the Battle of Monterrey, Mexico (September 21–24, 1846) in which General (and future President) Zachary Taylor gained a key victory for the United States in the Mexican-American War (1846–1848). Monterey is a Spanish word meaning "mountain of the king".

The GW Jeep Site, Monterey High School, and Monterey Hotel are listed on the National Register of Historic Places.

According to the United States Census Bureau, the town has a total area of 0.3 square miles (0.8 km²), all of it land. 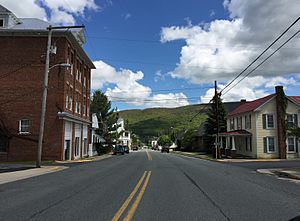 Monterey is located on U.S. Route 250, which was built through the area in the 1840s as a portion of the historic Staunton-Parkersburg Turnpike which linked the upper Shenandoah Valley with the Ohio River. The town of Monterey is heavily dependent on agriculture and on niche tourism generated from its many events and shops catering to tourists visiting for the tranquility and mountain air. The biggest festival is the Highland County Maple Festival, held on the second and third weekends of March, which brings roughly 50,000 visitors to the area.

There were 79 households, out of which 20.3% had children under the age of 18 living with them, 44.3% were married couples living together, 12.7% had a female householder with no husband present, and 41.8% were non-families. 40.5% of all households were made up of individuals, and 16.5% had someone living alone who was 65 years of age or older. The average household size was 1.86 and the average family size was 2.37.

The climate in this area has mild differences between highs and lows, and there is adequate rainfall year-round. According to the Köppen Climate Classification system, Monterey has a marine west coast climate, abbreviated "Cfb" on climate maps.

U.S. Route 220 and U.S. Route 250 are the main highways serving Monterey. US 220 is oriented northeast to southwest. To the southwest, the closest large city it passes through is Roanoke, while to the northeast, it is Cumberland. US 250 extends northwest to southeast, and its destinations include Staunton to the southeast and Elkins to the northwest. US 250 was built through the area in the 1840s as a portion of the historic Staunton-Parkersburg Turnpike which linked the upper Shenandoah Valley with the Ohio River.

All content from Kiddle encyclopedia articles (including the article images and facts) can be freely used under Attribution-ShareAlike license, unless stated otherwise. Cite this article:
Monterey, Virginia Facts for Kids. Kiddle Encyclopedia.