The area where Montevallo is now was once controlled by the Creek Indians. After being acquired in 1814 Jesse Wilson claimed a small hill on the northern bank of the Shoal Creek and created a homestead there, making it the oldest settlement in Shelby County. Wilson's friends and family followed afterwards and also settled in the area, and a settlement known as Wilson's Hill developed on the site. The settlement's location at almost the exact center of Alabama meant it was considered one of the potential sites for the University of Alabama. In an attempt to encourage the university to choose the site the settlement changed its name to Montevallo, which is Italian for the hill in the valley.

Montevallo was used by local farmers as a market town where they could sell and package their produce. It was incorporated as a city in 1848. In 1853 a railway was built between Montevallo and Selma which allowed further economic growth to Montevallo and in 1856 a coal mine was created nearby leading to further growth.

During the American Civil War, Union troops under the command of James H. Wilson camped in Montevallo in the spring of 1865 and skirmished with Confederates near the railroad depot. After the war, commercial life and growth was dominated by the coal mine owned by Truman Aldrich who leased the mine and attempted to increase production in response to the growing iron industry in the region and the growing city of Birmingham. Starting in 1890, company owned worker housing was built in Montevallo to house miners.

In the early 1890s, residents of Montevallo entered the city in a competition to be selected for the site of the Alabama Girl's Industrial School (later the University of Montevallo) a technical college for white women, raising funds to purchase land and antebellum buildings for the college they won and the college was founded in Montevallo in 1896. Commerce and economic growth increased in Montevallo after the establishment of the college, which was renamed Alabama College in 1919, started admitting men in 1956 and started admitting African Americans in 1968 and became the modern liberal arts University of Montevallo. The university became the main source of commerce in Montevallo and money generated by it was used by the municipal government to build schools. The university also allowed the community some stability during the Great Depression. It quickly took over the coal mine as the major employer in Montevallo, the coal mine closing in 1946. 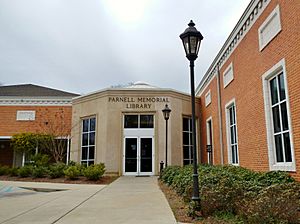 In 1974 the public library was moved to the Depot-in-the-Park, where Mayme Yarbrough was the librarian. It remained there until a 1978 fire destroyed the building and all its contents. The library was relocated to the City Hall Annex until 1984. At that time, the library was moved to the renovated telephone company switching building that had been donated by Dr. and Mrs. L.C. "Foots" Parnell, Jr., to the City for a public library. The renovation of the building was made possible through the efforts of many people in this community and beyond. From March 1984 until December 2006, that facility served as Montevallo's public library.

In response to the offer from Dr. L. C. Parnell, Jr., to house his Civil War collection in the existing library at 845 Valley Street if an expansion of the library were undertaken, Parnell Memorial Library Foundation was incorporated on March 23, 1998. The mission of the Foundation is to promote funding for expansion of the facilities, services, and programs of Parnell Memorial Library. Emily Pendleton spearheaded the efforts leading to incorporation and to the Foundation's receiving 501(c)3 nonprofit status with the IRS. She was the first President of the Foundation, serving from 1998 until 2001, when Elizabeth Rodgers was elected President.

As community needs grew, and particularly as community arts programming expanded, it was apparent that Montevallo needed a facility that was more than a traditional library. One of the primary agents of community arts programming is the Montevallo Main Street Players. The community theater group began more than thirty years ago and has performed in various city locations, including the Depot-in-the-Park and the City recreational building. For years, members of the Montevallo Main Street Players have needed a theater, complete with an up-to-date lighting and sound system, that they can use consistently for producing plays and storing props.

In June 2001, representatives from the Foundation, the Montevallo Library Board, the Library Staff, the Montevallo Main Street Players, and the City of Montevallo agreed that the community needed a new library in a new location to meet diverse community needs and to house the Parnell Collection of historical books and documents. The group requested that the City locate property suitable for building a new library that would also serve as a community cultural center. In August 2001, Mayor Grady Parker announced that the new facility would be located adjacent to Orr Park where it was subsequently built. Groundbreaking took place on November 1, 2004, and the Grand Opening was held February 25, 2007.

The new library includes an art gallery and a quality theater used by the Montevallo Main Street Players, the public schools, and other area groups. Along with the large meeting room, the theatre is a much-needed venue for productions by touring theatre companies and musical groups as well as for City of Montevallo meetings and other civic gatherings. 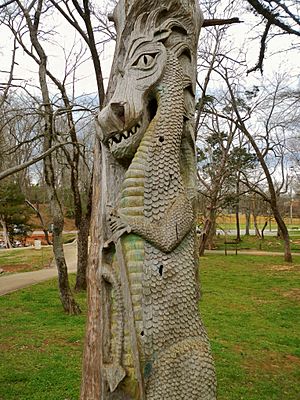 Orr Park is, perhaps, most notable for its many carvings by local artist Tim Tingle. Dragons, old men, and other enchanting creatures are carved into the ancient cedar trees around the walking trail.

The friendly relationship between Echizen and Montevallo began in 1995 with a common interest in pottery. Echizen is well known for its unusual pottery and the University of Montevallo excels in teaching and creating the art.

All content from Kiddle encyclopedia articles (including the article images and facts) can be freely used under Attribution-ShareAlike license, unless stated otherwise. Cite this article:
Montevallo, Alabama Facts for Kids. Kiddle Encyclopedia.