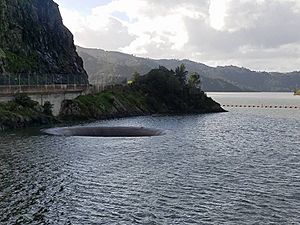 Just peeking over the top of the glory hole naturally for the first time in over a decade, February 16, 2017

Lake Berryessa is currently the seventh-largest man-made lake in California. Water from the reservoir primarily supplies agriculture in the Sacramento Valley downstream. The dam is noted for its classic, uncontrolled morning-glory-type spillway. The diameter at the lip is 72 ft (22 m). Locally, the spillway is also known as the "Glory Hole".

To the south is Putah Creek State Wildlife Area. 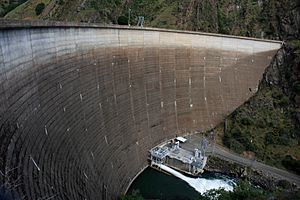 The downstream face of the dam

Although the dam and its 26-mile (42 km) long reservoir are located entirely in eastern Napa County, the dam lies less than 500 ft (150 m) west of the boundary with Yolo County. In addition, parts of the lake's watershed extend into Lake County.

The Monticello Dam Powerplant was completed in 1983 and has three generators, totaling a capacity of 11.5 megawatts (MW). The powerplant is operated and maintained by the Solano Irrigation District. The electrical power is sent mostly to the North Bay area of the San Francisco Bay Area.

Since construction the dam and reservoir have prevented about $5,015,000 in flooding-related damages.

The dam was built as part of the Solano Project, which was intended to provide a full irrigation supply to 96,000 acres (39,000 ha) of prime agricultural bottomland in Solano County and Yolo County. The project lands have been farmed since the 1840s, but irrigation was difficult due to the lack of a reliable summer water supply. The Berryessa Valley, where the dam and reservoir are located today, was formerly part of Rancho Las Putas, a 35,500-acre (14,400 ha) 1843 land grant to José and Sixto Berryessa, for whom the area is named. By the 1860s the rancho had been subdivided into many smaller parcels; before damming, the valley was one of California's most fertile agricultural regions, centering on the town of Monticello, with roughly 250 residents. 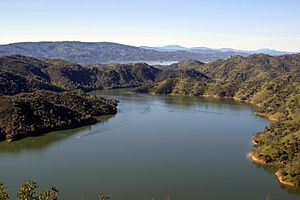 The Solano Project first took shape in the 1940s after the formation of the Solano Irrigation District to manage the water resources of Putah Creek. On November 11, 1948, the Secretary of the Interior formally authorized the project, which would be constructed by the Bureau of Reclamation. The Bureau initially intended to incorporate the project as part of its larger Central Valley Project (CVP), which would manage the combined watersheds of the Sacramento and San Joaquin rivers. However, locals strongly favored that Solano be financed and operated separately from the CVP. A Senate hearing in 1953 confirmed that Solano would be constructed as an independent project.

Land purchases in the future reservoir area were made in early 1953; however, landowners were allowed to stay throughout the construction period until their property was actually flooded by rising lake levels. The inhabitants of Berryessa Valley vehemently opposed the project, as did the city of Winters (one of the would-be beneficiaries of the project) because of close social ties to the town of Monticello. Opponents of the big dam proposed that a series of smaller reservoirs be constructed to supply the water, but this was deemed uneconomical. Most of Monticello's residents moved out by summer 1956, as rising waters approached the town. After the area was vacated, crews deforested the valley and demolished the existing buildings and infrastructure. About 300 graves had to be relocated to higher ground.

The primary construction contract was awarded to a consortium formed by Peter Kiewit Sons Co. and Parish Brothers, for construction of the main dam and relocation of California State Route 128, which ran through the Berryessa Valley. Excavation of the dam site and construction of a diversion tunnel continued through 1954, with the first concrete placed on August 9, 1955. Despite major flooding between January and May 1956, more than 90 percent of the concrete had been laid by December 1956, and the dam was topped out on November 7, 1957, at a total cost of about $37 million. This figure also includes the cost for associated downstream irrigation works and the highway relocation.

The reservoir took five years to fill after construction, reaching capacity for the first time on April 18, 1963. The reservoir completely inundated Monticello (though the city's ruins are visible at low water levels), and flooded 20,700 acres (8,400 ha) of the surrounding Berryessa Valley. At the time, Lake Berryessa was the second-largest volume reservoir in California, after Shasta.

The Bureau of Reclamation operates five recreational areas around the lake, providing boat ramps and day-use facilities. Recreational use has been declining since 2012; local resorts did not renew contracts, in order to combat pollution issues and upgrade the lake. As many as 1.3 million visitors used to visit the lake each year. The reduction in tourism has caused economic collapse of the surrounding area; as a result many residents have moved away, unable to keep up with the increase in utilities from the closure of the resorts. 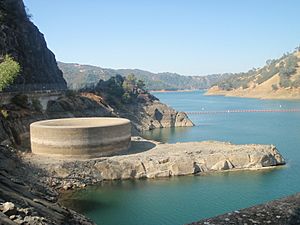 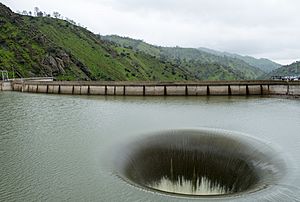 The spillway at Monticello Dam in operation, February 19, 2017.

Prior to that, the last time the spillway was active was February 16, 2017. After a number of storms had caused the lake level to rise 35.5 inches since January 1, 2017, the reservoir was on the cusp of spilling once again at 439.2 feet. Eager to witness this event, a number of local boaters and recreation enthusiasts generated enough wake to cause the reservoir to spill, albeit briefly, at 1:45 p.m. on February 13, 2017. Lake Berryessa reservoir filled and ran into its glory hole spillway for the first time in over a decade on February 16, 2017, at approximately 3:00 p.m. PST .

The Lower Putah Creek Coordinating Committee (LPCCC) worked on a Watershed Management Action Plan which concluded the effects of Monticello Dam on the geomorphology of Putah Creek and other connected hydrology systems. A comparison of the creek before and after the project showed ground water was recharged less, sandbars were deteriorated, and bed level lowering in channel decreased the population dynamics of cottonwood and willow.

All content from Kiddle encyclopedia articles (including the article images and facts) can be freely used under Attribution-ShareAlike license, unless stated otherwise. Cite this article:
Monticello Dam Facts for Kids. Kiddle Encyclopedia.